The Tennessee Department of Environment and Conservation (TDEC) held an informational meeting and public input session on Monday, November 22 in Kingston, Tennessee regarding the Tennessee Valley Authority’s (TVA) request to modify its water discharge permit at the Kingston Coal Plant. TVA is asking for the modification of its permit in order to continue to pollute the Clinch and Emory Rivers with toxic waste from the Kingston fossil plant, even though they agreed to install technology that would decrease the amount of pollution in their water discharge back in 2017.

Sobering reminder: the Kingston community is still dealing with the effects of the largest coal ash spill in U.S. history that has caused over 50 deaths. This permit request also comes as TVA attempts to dump toxic coal ash in a majority Black neighborhood in Southeast Memphis from the shuttered Allen Steam Plant with little public input.

Background on the water discharge permit

The current rule–which TVA has already agreed to comply with through 2023–stems from a 2015 Environmental Protection Agency (EPA) rule—called an effluent limitation guideline or ELG—which seeks to limit water pollution from coal plants. Under the Trump Administration, in 2020 the EPA rolled back those regulations at the request of industry insiders.

Now, TVA is seeking to modify its earlier permit to be in line with the 2020 rules, which would allow them to continue to pollute into waterways. This request is especially concerning given that the EPA has already said it plans to revisit and possibly increase the stringency of the 2020 rule, which was implemented in October of that year, right before federal elections. In fact, TVA wants to completely remove the 2015 permit’s requirements to install wastewater treatment technology that would eliminate or significantly reduce pollution from toxic metals like mercury, arsenic, and selenium.

In addition to previous public assurances that they would reduce water pollution to meet the 2015 standard, TVA has already begun work on installing the technology to meet the standard by the 2023 deadline, including the installation of lined process water basins, and completed much of the design work for the water treatment system which would significantly reduce arsenic, mercury, and selenium from its wet scrubber wastewater. Under its current permit, TVA discharges one billion gallons of cooling water along with fourteen million gallons* of toxic wastewater into the Clinch and Emory rivers every day. *Page 84 mentions 14 million gallons per day of effluent flow from Outfall 001, and page 85 mentions the one billion gallons of cooling water. Currently, the permit has no limits for some toxic pollutants, including arsenic and selenium.

During the TDEC hearing on Monday, TDEC representative Vojin Janjic repeatedly said that the standard was technology-based, or rather that the technology exists and can be installed relatively economically, so it seems strange that TVA would want to renege and not install available, economical technology would reduce toxic pollution. Installing this equipment will cost TVA an estimated $100 million, but the company reported $1.5 billion in profits last year alone. It seems like a small price to pay to help keep waterways–which TVA helps manage–in East Tennessee clean. Wisely, TDEC included what is known as a “reopener” provision in the new draft permit, which would require a revision of the permit should EPA finalize new more stringent rules in the future.

Even more context, TVA is considering retiring the Kingston plant by 2028, but it has yet to make a final decision.

The background on this issue invites the question: If TVA has already said they can protect people’s health and the environment by meeting the 2015 standards, why should they be allowed to roll them back now? Many concerned Tennessee residents asked the question during public comments given at the November 22 hearing in Kingston. 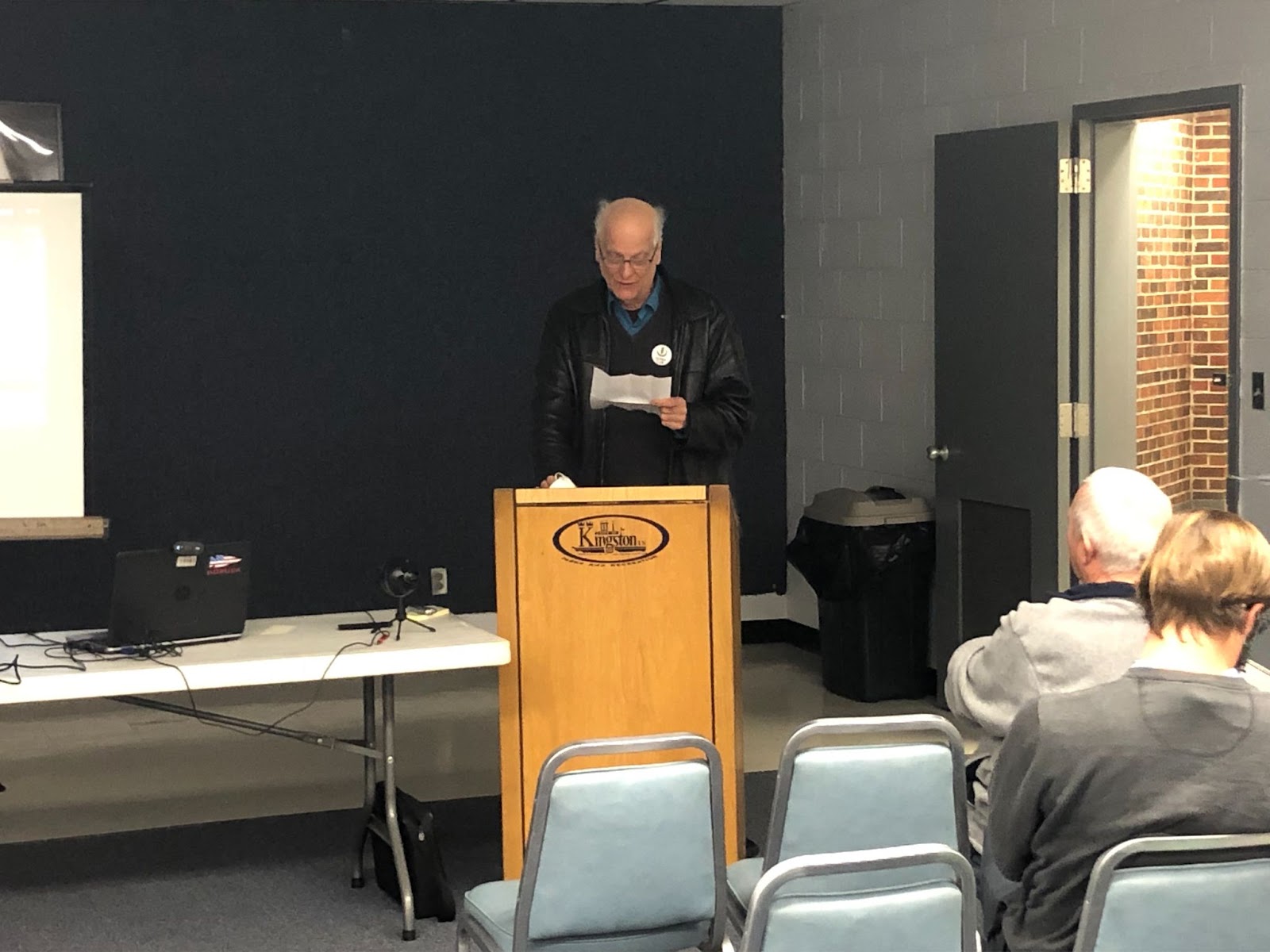 Kent Minault: “Those (2020) guidelines were the product of an extremist agenda in order to rig the rules to bring back coal. The thought was “coal would be ok if we just pollute the water a little more!” This is an absurd agenda. No sensible advocate is suggesting a return to the massively polluting energy system of 20 years ago when coal was providing roughly half our energy. We have much safer and cleaner energy resources to deploy now. Real leadership from TVA would look like clearly committing to large percentages of renewable energy and steep reduction in fossil fuel burning before 2030. Asking for the 2020 ELGs to be made permanent looks like hedging and dodging about to keep open the prospects of our obsolete fossil fuel system. TDEC would be well-advised not to baby them along in this.”

Bonnie Swinford: “First off I want to thank TDEC for having this public hearing. It’s been quite a while since I’ve been to an in person public hearing, but just having an online public hearing where we can hear each other, where we can hear our neighbors, what other community members have to say about a project is really valuable so I appreciate it. Thanks for holding this public hearing. I live in Knoxville, but lived and worked in Kingston on and off for over a decade. I’m here on my birthday because I really care about this issue. I care about clean water in Roane County, I care about clean water for the people of Kingston. I love this place. I love recreating here, I love Whites Creek, the kids I hang out with in the summer, Riley’s Creek is their favorite place on the planet. I want to see strong protections put in place and I’d like to see Kingston retired within this permit. If they’re going to retire it, put that pathway in this permit.” Swinford also delivered a sign-on letter from the Sierra Club which 198 people across the Tennessee Valley had signed on to.

Adam Hughes: “The first time I ever came to Kingston was in late 2014 when TVA was trying to put in a new coal ash landfill at a site that had had multiple identified sink holes through their own engineering reports including one that had a catastrophic drop out just a few years before. My girlfriend and I spent Valentine’s Day in Roane County that year because we were really charmed by the community and we’ve been back here many times to listen to music, spend time with friends, and as recently as this Friday to go around talking about this hearing and enjoy some delicious cannolis from the bakery in Harriman. So Roane County in particular has become a place that is particularly important to us. I’ve also had to come back here year after year to public hearings because TVA just kept wanting to put more coal ash in the water, argue against stricter pollution levels, build more coal ash landfills in unfit sites. It’s really difficult for me to see that and see the way that TVA has treated Roane County. I lost a friend who I met through this kind of work who was a worker in coal ash clean up. He passed away earlier and he inspired me to want to get up and say something. We do know that TVA has committed to meeting more stringent limits on the permit. We do know that they are taking advantage of a recently passed rule that eases those limits. They’re applying for a new permit just so they don’t have to pay to install new pollution control technology in a year where they made a record $1.5 billion dollars which I think is a real shame. So my only comment is that given all this, people in Roane County, that all of us need TDEC to really demand a special obligation that TVA holds to this community and that TVA seems to be continually unwilling to meet. Please demand nothing but the most protective standards under the Clean Water Act which is supposed to eliminate all pollution in the course of this permitting process. To TVA, please do a better job for this community and everyone who loves it.”

Please add your voice in calling on TDEC to protect Tennesseans’ health and environment. TDEC is holding a public comment period for this permit request from TVA until November 30th. Take action and submit your own comments to TDEC using this link from our friends at the Sierra Club. Stay tuned here for future updates.

Brady Watson
Kansas native Brady Watson attended Kansas State University where he received a bachelor’s degree in History, and then a master’s degree in Documentary Film and History from Syracuse University.  After…
My Profile
FacebookInstagramTwitter