This blog post was written by Jason Carney, former Clean Energy Program Manager with the Southern Alliance for Clean Energy.

On April 11, students in the Academy of Alternative Energy, Sustainability and Logistics at Whites Creek High School (WCHS) cut the ribbon on community solar energy array they helped design and build.

I’m so proud of this project, which represents over five years of hard work and true community effort. The event attracted numerous state, city and school officials. Community solar can change the game in African American communities: for people, planet, and profit. It is vitally important that local communities be educated on solar technology and community solar in particular because the powers that be are steady at work with misinformation and systemic impediments toward communities owning and managing their own power.

Here’s the story – and the people – behind the big day. 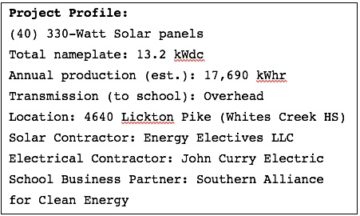 People: African-American unemployment has been consistently double that of whites for the last six decades. The solar industry is a door to the green economy and it has the potential to address this persistent societal issue.

Planet: 97% of the scientific community agrees that humans are the cause of climate change. Even if you disagree with the scientific community you must agree that oil, coal, and natural gas are finite resources that take millennia to create and we are using them beyond replacement levels. It is much more sustainable for our planet to make electricity from renewable sources like solar power.

Profit: The savings from solar panels will reduce your electric bill; saving you money. According to the size of your array, your electrical consumptions needs and who installs it, it can pay for itself well beyond its useful life; leaving you with pure profit afterward.

I approached the Nashville Electric Service circa 2015, but did not leave feeling that I’d made the appropriate impression or that there was no interest for community solar. Community Solar, because of economies of scale (i.e. a proportionate saving in costs gained by an increased level of production), has the potential to democratize solar photovoltaic technology (PV), i.e. make it accessible to everyone. This is very significant because until the Obama Administration introduced the SunShot Initiative, PV was only adopted by fanatics and the affluent.

What I learned in the process of developing this project is that most people were unfamiliar with PV and how power is created and consumed in the city. The only thing people knew was that their electricity was either on or off and who to contact if it was off.

So, by God’s providence, I discovered, 5 minutes from my house, Whites Creek High School had an award-winning Academy of Alternative Energy, Sustainability and Logistics. And thankfully, the faculty was accepting of my idea to incorporate solar into their existing curriculum. It was my intention to inform the community about solar power through these great students.

The goal for this project became to expose the Whites Creek-Bordeaux community to the benefits of the green economy through photovoltaic technology and show how solar technology can have a positive effect on a community of people with disparate interests. It provides a host of benefits to individuals, families and communities; including jobs, decreased energy bills and improved air quality.

To accomplish this goal, students first learned about the history of solar energy, how photovoltaics produce electricity, and all the careers that are linked to the solar industry. Then curriculum was brought in, followed by real world experience with professionals and equipment in the solar industry and finally the construction of the array.

This project influenced hundreds of students over 4+ years of designing, planning and execution. The final group of students included seniors Daniel Van Clief and Rachel Rhea. Rachel Rhea was instrumental in getting the funding for the project.

Daniel Van Clief was truly the closer. He worked constantly beside me to complete the construction. There was a moment in which this became his project. He didn’t always know what to do or why, but he understood the benefits and kept us moving forward. For me, this was a glimmer of my vision (i.e. engaging African-American in the green economy) becoming a reality. Daniel’s engagement was pivotal for me as I continue to believe that African-Americans are interested in sustainability; especially when it is connected to quality of life improvements like jobs and lower bills. I learned so much doing this with the students. Here’s Daniel “flipping out” about solar!

This has been a true passion project and a true example of ‘community solar’. I have spent my own money; working on weekends and holidays to see this to fruition. My work to become certified in solar and connections I’ve made around the city during my graduate school work and as a native of Nashville have been foundational toward success, but without the people of Whites Creek, my family and the MNPS officials like Dr. Donna Gilley and Casey Megow there is no way I could’ve completed this. SACE was an integral partner in completing the project.

I am very relieved to know that I have a real tangible fixture to reference going forward in my own entrepreneurial pursuits. I am happy that the work is being recognized at the city, state and national level. But, what I think is most rewarding is that Academy Principal, Jeremiah Davis, saw it fitting that I receive and Academy tie and coin. I will treasure these items. To me, it symbolizes true community collaboration. Too often, our communities are victims of transactional, toxic giving via items like mobile trucks and days-of-giving. The community may welcome the support but can still feel a disingenuous spirit.

Although it has taken the full completion of the solar array for the people to truly understand my vision, I believe they still could feel that I wasn’t a fly-by-night volunteer. Recognition is coming in from the city and further, still the tie and coin symbolize my acceptance by the school and community. This array is an example and, hopefully, a harbinger of the sustainable giving that communities deserve.

The solar industry has been exploding with opportunity for years now, but not in Tennessee. Why do you think that is? Is it because we don’t get enough Sun? The fact is there are those that would like to keep us from experiencing the power of the Sun; specifically, the Tennessee Valley Authority (TVA). TVA was created over 80 years ago to provide economic relief to citizens in the Tennessee Valley. Today, they are contributing to poverty in Tennessee by increasing fixed fees not tied to use of electricity and directly suppressing the full strength of the solar industry in Tennessee by removing incentives and putting an unnecessary cap on the number of systems that can be installed. The most vulnerable in our population, low- and fixed-income communities, are hurt most by these barriers and would benefit the most if these barriers were removed.

So, we’re gathering Tennesseeans to Renew Tennessee: call on TVA, local power companies, and elected officials to stop blocking the sun, solve energy burdens with energy efficiency, and serve the public with transparency and accountability. Join the movement at www.RenewTN.org.

Special thanks to the leaders who attended the ribbon cutting:

Regional Advocacy Director Amelia Shenstone contributed to this blog. And special thanks to Jimmie Garland for providing great pictures of the ribbon cutting.

Byhalia Pipeline is contrary to the future we need

"[T]o meet the demands associated with an increase in the pace of solar deployment, we're going to need a larger workforce in Georgia." SACE interviews the co-founder of one of the largest…

Biden is laying a solid foundation for action on climate, energy, and equity

Utilizing executive powers and simultaneously working to support and bolster existing market trends, the Biden administration seems to be pursuing a sea change in how we confront the climate crisis.