We are pleased to release of the second annual "Solar in the Southeast" report and hope that you will find the data and analysis both helpful and interesting. We updated last year's report with historical data through 2018, and also provide a look ahead with a four-year forward forecast to 2022.

Watch a recorded webinar covering this report in detail.

As solar announcements pop up throughout the Southeast, sometimes from a large corporation such as Facebook or Google and sometimes from a utility, it can be challenging to keep track of what current trends and solar news mean for the Southeast solar market as a whole. Here at SACE, we have found it helpful to take a step back and review solar development through an unbiased, apples-to-apples metric, which is one of the reasons we developed this annual report: “Solar in the Southeast”. Today, we are pleased to announce the release of the second annual report and hope that you will find the data and analysis both helpful and interesting. We updated last year’s report with historical data through 2018, and also provide a look ahead with a four-year forward forecast to 2022. 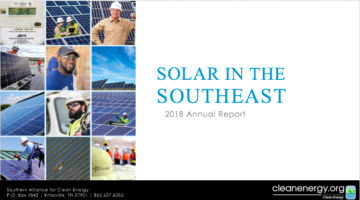 To provide an equitable, unbiased comparison of various-sized utilities throughout the Southeast, SACE ranks utilities on the basis of watts per customer (W/C) of solar power. The 269 W/C solar ratio we observed in 2018 represents a 63% increase from the comparable 2017 W/C ratio.

We encourage you to take the time to go through the full report, but here is a preview of several of the main take aways:

8 Key Points from the Solar in the Southeast, 2018 Annual Report

In subsequent blog posts, I will unpack some of these observations with more detailed analysis. If you have questions about any of the content in the report, I encourage you to email me at [email protected], as these questions may be helpful to address in upcoming blogs. In case you need that download link one more time, you can download and read our new report here.

Last week we hosted a “Solar in the Southeast webinar!” Watch the recording where we dug into some further analysis of this report’s findings. The webinar is free and open to the public.