Last week, our blog series took a look at the SunRisers. But there are a number of other large utilities who deserve recognition on both our current and future leaderboards. Today's blog examines those. 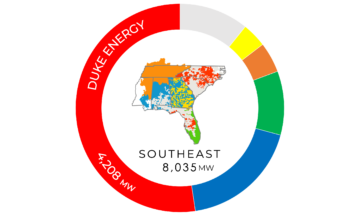 Duke Energy (including its utility operations in the Carolina’s as well as Duke Energy Florida) can currently boast half of all the solar in the Southeast. Not surprisingly, the Duke subsidiaries rank favorably on the W/C solar ratio, as well — both in the base year (2018) and the four-year forecast (2022).

SCE&G was below average in last year’s report (with 162 W/C) and leapt to second place in 2018 with 512 W/C (almost double the region average). Last year’s report had, in fact, identified SCE&G as one of the first SunRisers, reflecting the second highest four-year increase in W/C solar ratio; so 2018 witnessed it starting to deliver on that ambition.

Georgia Power remains near the top of the list. Their ratio is more than 50% above the region average and as we expressed in the report, “The Georgia PSC has an opportunity to ensure a legacy of leadership by insisting on expansion of both utility-scale and distributed solar in Georgia Power’s 2019 IRP.”

When we shift our focus to the 2022 forecast (right), we can gauge the 4-year ambition of those Florida utilities.

Likewise, Duke Energy Florida, was on the SunRiser list last year and barely missed it this year. We project their solar ratio for 2022 to be above the region average.

And as we emphasized in the report, Florida Power & Light (FPL) “recently announced the boldest 10-year solar commitment of any utility in the country. This will more than double the annual pace of solar expansion for the largest utility in the Southeast (4.9 million customers),  FPL will exceed 3,500 MW of solar by 2022 (over 9,000 MW by 2029).”

Perhaps a more important indicator is that the Southeast average itself will more than double over the next four years (from 269 W/C in 2018 to a projected 631 W/C in 2022). And that is largely due to these leading utilities at the top of these lists.

A number of issues that we (Southern Alliance for Clean Energy & Southface), and other parties, are concerned about, were either omitted from the Stipulation or otherwise insufficiently addressed.