Electrifying a city’s transportation system is a key solution that provides significant climate change and health benefits. The positive economics of transitioning to electric fleets and adopting EV-friendly policy is a business reality that many municipal leaders are getting ahead of. In the age of climate denial at the Federal level, local leaders have the opportunity to play a key role in reducing carbon emissions by adopting EV policies that provide their communities with healthier outcomes for their citizens and the environment while offering economic benefits.

Keeping Paris Accord Transportation Goals
A City’s guiding principles provide a powerful message as to the community’s values. When President Trump pulled out of the Paris Accord, cities and counties across America made the bold decision to follow through with ambitious transportation goals to shrink their carbon footprint because they value strong, resilient communities with vibrant economies and healthy environments.

Electrifying a city’s transportation system is a no-regret solution that provides significant climate change and health benefits. According to the US Department of Transportation, every zero emission bus is able to eliminate 1,690 tons of CO2 over its lifespan, which is the equivalent taking 359 passenger cars off the road. One study from Columbia University found transitioning buses from diesel to electric could reduce health costs by approximately $150,000 per bus overall. Additionally, electric buses reduce fuel and maintenance costs annually by $39,000. The positive economics of transitioning to electric fleets and adopting EV friendly policy is a business reality that many municipal leaders are getting ahead of.

Leaders in the Southeast
Despite the increased climate risks facing the Southeast, most of the leadership in clean transportation in the U.S. has come from the Northeast and Western states. Although the South lags, two leaders – Atlanta and Miami-Dade County – are worth highlighting for their efforts to transition to electric transportation. 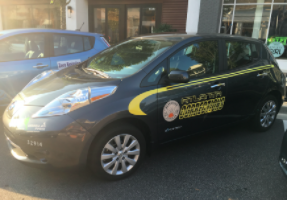 Mayor Reed unveiled Atlanta’s Power to Change Plan in 2013 with the goal to reduce vehicle emissions by 20 percent by the year 2020. Currently, the City is in the process of rolling out 60 city-owned electric vehicles, along with the corresponding infrastructure charging network, to increase the City’s electric fleet inventory. This program will result in one of the largest municipal fleets of electric vehicles in the southeast United States. Ultimately it is intended to reduce the city’s dependence on fossil fuels and save tens of thousands of dollars per year. Additionally, Atlanta adopted an EV Ready Ordinance to enhance adoption of electric vehicle service equipment (EVSE). In November 2018, an ordinance was signed requiring all new residential and commercial construction to have wiring installed making the building or parking lot “ready” for EVSE; i.e., charging stations – as it is far more cost productive to install wiring to support EVSE during construction vs retrofit costs. Estimates are that this will increase total new construction costs by about .1% (vs. construction costs without the wiring).

Miami-Dade County, FL
In October 2018, the Miami-Dade County Board of Commissioners passed Resolution R-1034-18 to reduce Miami-Dade’s gasoline consumption by 30% and diesel use by 70% by 2028. It also sets the goal of powering at least 50% of the county’s municipal buses by electric by 2035. More recently, the Miami-Dade County Commission voted in favor of an ordinance to increase electric vehicle (EV) adoption in their County by requiring a certain number of EV charging spaces in new developments “ready” for charging equipment installation. The Ordinance will have a final vote in early March.

Roadmaps Across the Country
It is imperative that other Southeast cities become National leaders in the transportation space. The good news is there are several examples of cities that have trailblazed and charted a course towards electrification.

In the age of climate denial at the Federal level, local leaders have the opportunity to play a key role in reducing carbon emissions by adopting EV policies that provide their communities with healthier outcomes for their citizens and the environment while offering economic benefits.

Read more and find out how you can join us by visiting our website.