This blog was written by Sara Barczak, former Regional Advocacy Director with the Southern Alliance for Clean Energy.

Today, March 11, marks the 8th anniversary of the deadly earthquake and subsequent tsunami that led to the devastating nuclear accident at the Fukushima-Daiichi nuclear plant in Japan in 2011. The ramifications of the triple nuclear meltdown continue today as thousands of Japanese are still displaced and an extremely complicated, expensive and dangerous cleanup effort that will span decades continues. The disaster did push Japan towards a safer, clean energy future with massive growth in renewables while the vast majority of nuclear plants still remain closed. On this somber anniversary, we wanted to call attention to the regulatory side of the nuclear power industry here in the U.S. and highlight a unique perspective from a former regulator, Gregory Jackzo, who was Chairman of the U.S. Nuclear Regulatory Commission during the accident. Mr. Jaczko recently released a book about his experiences, which include the U.S. response to the #Fukushima disaster. Below is a book review from a long-time friend of SACE, Don Safer, board member of the Tennessee Environmental Council and Know Nuclear Committee Chair of the Tennessee Chapter of the Sierra Club. I supplemented Mr. Safer’s review with links to additional information. –Sara Barczak, SACE Regional Advocacy Director

An Alarming Inside View from the Top of the Nuclear Regulatory Commission: Former Board Chairman Jaczko Excoriates NRC by Don Safer 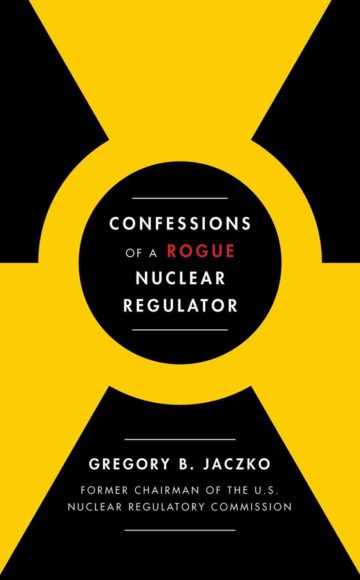 In January 2019, Confessions of a Rogue Nuclear Regulator, a book by former U.S. Nuclear Regulatory (NRC) Commissioner (2005 to 09) and Chairman (2009 to 12) Gregory Jaczko was released. It provides an important, troubling look at the work of the NRC during those years, which include the 2011 Fukushima triple meltdown of the U.S. designed Japanese reactors. The book is accurately described on the jacket cover as “a shocking expose’ from the most powerful insider in nuclear regulation about how the nuclear energy industry endangers our lives – and why Congress does nothing to stop it”.

In the Prologue Jaczko describes the NRC as: “an agency overwhelmed by the industry it is supposed to regulate and a political system determined to keep it that way.” The book is his personal story of how he evolved from a “nuclear power moderate” concerned with nuclear safety at the start of his time on the commission to a full-blown nuclear industry critic with the message: “nuclear power will never be safe.” It is also the national story of the capture of the NRC’s work by wealthy, powerful utility and nuclear industry proponents. Robert F. Kennedy Jr. says it very well on the book’s jacket back cover: “The infuriating inside story of how a corrupt, outmoded, and inefficient nuclear industry maintains its market position against safer, more efficient forms of renewable energy by hoodwinking and corrupting Congress and co-opting the regulators.”

The book is a very important read for all interested in nuclear safety. If you are new to the questions and challenges that nuclear power poses it provides a critical look at the agency tasked with protecting the public’s safety from nuclear power’s unique immediate and incredibly long term biological and environmental threats. It should help to dispel unwarranted trust in the NRC, utilities and often uninformed elected officials.

If you are a seasoned, skeptical and even cynical veteran of many years of engagement on the issue you will be nodding your head in agreement and find your frustrating and exasperating experiences in advocating for nuclear safety and sanity explained, put into context and validated.

Jaczko documents the economic and political power of the nuclear industry, its ability to control the U.S. Congress, and its near total capture of the NRC Commissioners. This explains the convoluted, irrational and dangerous regulatory decisions that result in mind benders like “Waste Confidence”, the multiple lives of TVA’s zombie reactors at Bellefonte, burying spent fuel rods next to the ocean at San Onofre, California and the list goes on and on and on. He also documents Congressional bullying of the NRC when the industry feels pressure from the agency to improve safety.

The information and perspective in the book about the Fukushima Nuclear Disaster is especially valuable. Jaczko experienced the terror of an out of control nuclear accident with multiple explosions and a triple melt-down. He realized the unwarranted hubris of many: “most nuclear safety professionals believed plants were effectively designed to prevent the events we were now seeing.” (p 79)  He learned of all the horrifying effects and possibilities and was profoundly changed by it. He summarizes the results of three independent Japanese investigations of cause the meltdowns and explosions:

“the nuclear power regulators were too accommodating to those they were supposed to regulate.  They worked together to create what one report called a ‘nuclear village,’ not an idyllic hamlet where business and government worked in harmony for the good of all but a corrupt, toxic environment.” (p 71)

He recognized a similar situation in the U.S. and was shocked by the inadequacy of the U.S. regulatory response to use what was learned to improve nuclear reactor safety in the U.S. He finally concluded that it is impossible to make “reactors impervious to catastrophic releases of radiation”. (p 116)

Jaczko is not the first former NRC Commissioner to become a critic of the agency and the industry, but he is the first former Chairman. Former Commissioners Peter Bradford (1977-82) and Victor Gilinsky (1974-84) are vocal critics. More common is the use of the lucrative revolving door between cooperative Commissioners and the nuclear industry (see the August 2, 2016 article in The Ecologist by Linda Pentz Gunter on the NRC). It is not a surprise that Jaczko had a very difficult time finding any employment after he was forced out of the NRC.

This book is an important addition to the works of the many critics of the Nuclear Regulatory Commission and the nuclear enterprise.