This is a preliminary post for SACE’s Where The Candidates Stand 2020 blog series examining where next year’s candidates for state and federal offices in the Southeast stand on key energy and climate issues. Note: The Southern Alliance for Clean Energy does not support or oppose candidates or political parties. Links to reports, candidate websites and outside sources are provided as citizen education tools. #CandidatesAndEnergy2020

Tonight 10 Democratic presidential candidates will take the stage in Atlanta, Georgia in the latest of 12 scheduled debates during the Democratic presidential primary season. I can feel you groaning: “Another primary debate? Why should I spend more hours listening to those talking heads?” And while there are likely plenty of things competing for your time, for those of us who understand the urgency of climate change and the need for strong executive action, the opportunity to hear moderators ask and candidates respond to questions on climate change is a powerful motivator to watch yet another debate. [PS – you can stream the entire debate on washingtonpost.com or their apps starting with a live show beginning at 8 p.‌m. ES‌T.]

Quite remarkably, and even though we’re only halfway through the debate calendar with months to go before the first votes are actually cast, there’s already been more attention paid to climate change and climate actions than in any presidential election cycle to date.

Over the last year, many candidates have released detailed policy proposals specifically addressing the threat posed by climate change. And more importantly, because a policy paper can be written by staff, we’ve had two chances to hear candidates talk in-depth about the threats from climate change and how they plan to address it. The first was in early September when 10 candidates took part in a seven-hour long climate town hall hosted by CNN, which one Vox commentator called “the most substantive discussion of climate change policies ever broadcast on primetime television,” and the second was later that month when many of those same candidates participated in a two-night climate change forum hosted by MSNBC.

Why such a strong interest in climate change now? Likely a combination of (1) dire warnings from scientists (like this one earlier this month), (2) real-time impacts being felt by communities across America from sea level rise to crop declines, and (3) the energy and coordination of a youth-led climate movement who have finally succeeded in pushing the climate issue into the top tier for progressive voters and candidates.

Based on their proposals and statements offered at the town hall/forum, it’s fair to say that most candidates support a mix of regulatory action as well as major new legislation, which is important because achieving the aggressive targets that scientists say is essential to keep warming to acceptable levels would almost certainly require the latter coupled with strong executive action.

So what to look for on tonight’s debate stage? According to the Washington Post, tonight’s co-host, climate change is one of the likely top tier issues: 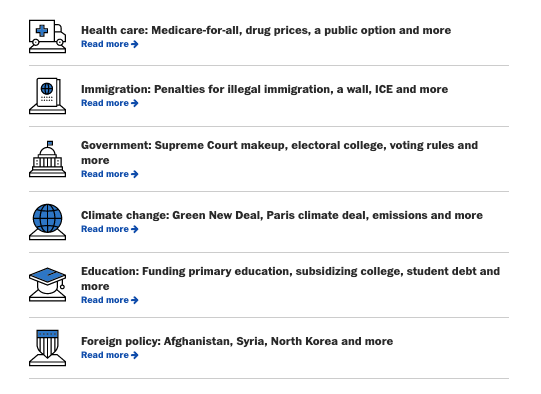 The paper has pulled together a helpful comparison where all the declared candidates stand on a range of climate-related issues we may hear about: Green New Deal (which we wrote about earlier this year), the Paris Climate Agreement, fossil fuels vs. clean energy, or the concept of carbon taxes.

We’ll be following along with this debate and others to come, and when the primaries have wrapped up, we’ll begin our ‘Where the Candidates Stand’ 2020 blog series profiling where presidential candidates from all the major parties (as well as U.S. Senate, gubernatorial, and Public Service Commission candidates from the Southeast) stand on climate and energy issues to help voters make an informed choice. Stay tuned for that in the summer of 2020.