This blog was co-written by John D. Wilson, former Deputy Director for Regulatory Policy at the Southern Alliance for Clean Energy.

Yesterday, Duke Energy announced that it is establishing a long-term goal of achieving net-zero carbon emissions by 2050. This goal is based on reports from the scientific community and policy proposals, and similar goals have already been adopted by several large electric utilities such as Xcel Energy and Southern Company. 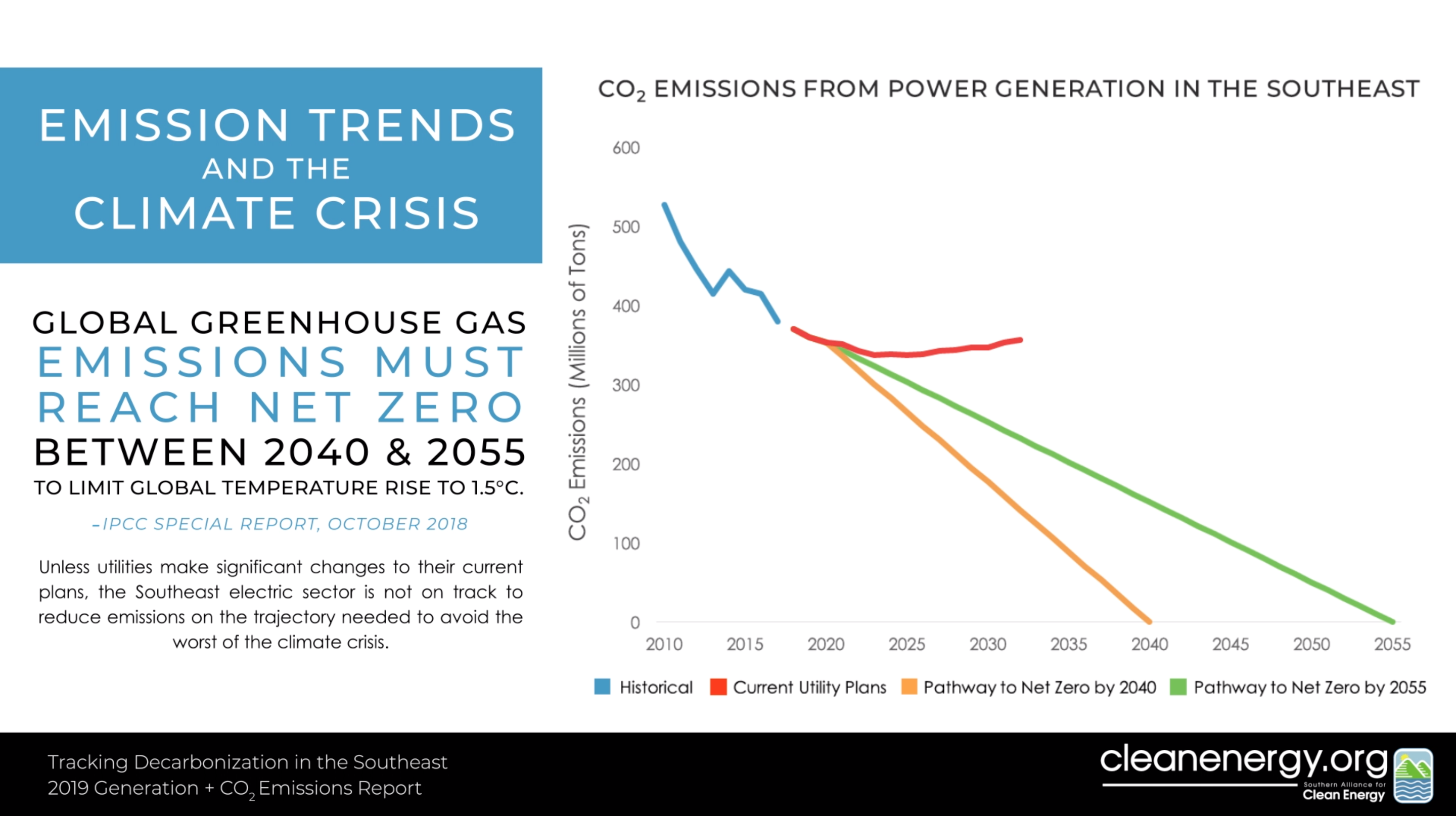 This goal exists among not only the scientific community, but also among investor groups. Earlier in 2019, a group of investors and pension funds sent a letter to the top 20 largest publicly-traded electric generators in the United States asking for detailed plans to achieve carbon-free electricity by 2050 at the latest.

While Duke Energy and some other utilities have responded by setting the goals, they have not yet put forward adequately detailed plans for how to achieve those goals. Most utilities are also setting ambitious-sounding goals for 2030. For Duke Energy’s part, it is raising its previous carbon reduction goal from 40% of 2005 levels to 50%. Now that Duke Energy has joined peer utilities in making a net-zero carbon commitment, let’s dig into what it is saying about decarbonization and what Duke is doing to meet that goal.

Duke Energy has proposed a number of actions intended to reduce emissions in their press release, which also includes a video providing leadership perspective on the carbon goal. Let’s take a closer look at how the ideas proposed by Duke Energy line up with actions currently underway at the utility.

What Duke Energy is saying: “We’re planning to at least double our portfolio of solar, wind and other renewables by 2025.” and “We will need a diverse set of resources including nuclear, natural gas, renewables, battery storage, energy efficiency, and the electrification of transportation.”

Duke Energy is also currently host to the largest concentration of solar power development in the region. As we noted in our most recent Solar in the Southeast report, all three of Duke Energy’s southeastern operating companies rank in the top five among large utilities in terms of solar penetration.

That said, while an increase in clean energy is always laudable, the promise to double the portfolio of renewables by 2025 isn’t news. In 2018, Duke Energy’s Southeastern utilities had over 4 GW of solar, and their plans for 2025 already included an additional 5 GW of solar. Doubling of renewables, as outlined in the press release, is actually lower than what Duke has already put into its plans.

What Duke Energy is saying: “We’ll continue deploying low-cost natural gas to speed the transition from coal and maintain reliability. New natural gas infrastructure will be required to fuel this transition and balance renewables.”

What Duke Energy is doing: Duke Energy is making good on its promise to continue deploying natural gas … but we wish they wouldn’t! Due to Duke Energy’s gas-heavy near-term plans, their current forecast does not include new or further waves of emissions reductions beyond 2020. Gas generation accounts for about 40% of all carbon (CO2) emissions in Duke Energy’s operations in the Southeast, and their plan to keep adding more means they are unlikely to reduce emissions much after 2020.

What Duke Energy is saying: “We will also need coal for some time even as we increasingly rely on other fuel sources,” and “Phasing out remaining coal generation will occur gradually and on different timelines in the states Duke Energy serves to protect customer rates and reliability.”

What Duke Energy is doing: While Duke Energy’s words regarding coal retirements sound a little noncommittal, there are promising actions shown by the utility both within the past few years and on the horizon. Duke Energy has indeed retired a number of coal plants, most recently two coal-powered generators retired in 2018 at the site of the Crystal River plant, as well as Riverbend and Buck Steam Station (implosion pictured above) in 2013, and WS Lee in 2014. Recent and future retirements in the state of Florida also position Duke Energy Florida to nearly phase out coal by 2025, which stands in contrast to Duke Energy’s generation in the Carolinas.

A nudge towards significant decarbonization came just last month in the form of an order from the North Carolina Utilities Commission directed Duke Energy to evaluate the potential to retire each and every one of its coal plants in the state. Duke Energy will file coal retirement evaluations in its next resource plans in September 2020.

What Duke Energy is saying: “Getting to net-zero carbon emissions, while ensuring energy remains reliable and affordable, will require new technologies. That’s the very reason we need to act now,” Good said. “We must continue leveraging today’s technologies while sustaining investment in innovation for this vision to become reality.”

What Duke Energy is doing: It’s difficult to speculate on what Duke Energy is doing in this area. Duke Energy has not gone into significant detail on what new technologies it is looking into or how it expects to deploy them for significant impacts emissions. High costs and the need to further develop technologies are often falsely cited as the primary barriers to decarbonization. Will Duke Energy defer action until new research delivers a miracle? We hope that as Duke Energy works with stakeholders to deliver on its new vision, and the utility will earnestly engage the structural barriers within current utility business practices rather than invest heavily in natural gas and an uncertain future vision.

Will Duke Energy’s 2020 resource plans put the details into its decarbonization vision? We hope so and will continue tracking and reporting!

Heather Pohnan
In her role of Energy Policy Manager, Heather supports SACE’s regulatory strategy through policy research, and data and geospatial analysis. Her work will focus on projects that support the inclusion…
My Profile
FacebookInstagramTwitter

On May 16, 2022, Duke Energy submitted its proposal for a Carbon Plan to meet goals legislated by HB 951 to the North Carolina Utilities Commission. Here is a summary of what…