U.S. Senators Jeff Merkley (D-OR) and Sheldon Whitehouse (D-RI) proposed legislation that would put the whole county on a coordinated path toward 100% zero emission vehicles. On November 28, 2018, the pair introduced a bill to the 115th Congress to amend the Clean Air Act to create a nation zero-emission vehicle standard. The Zero-Emission Vehicles Act (ZEVA) would set a comprehensive federal ZEV standard and require at least 50% of all new car sales in America be zero-emission vehicles by 2030.

State Leaders
California recently achieved the momentous milestone of having electric vehicles capture 10% of their new vehicle sales in August. That didn’t just happen overnight, nor did it come to be by chance – it’s a culmination of clean transportation policy nearly three decades in the making.

Often California is a leader in innovation and eventually, those ideas expand across the U.S. and make their way to the Southeast. For example, in 1990 the California Air Resources Board (CARB) first adopted the Zero Emission Vehicle (ZEV) requirement as part of the low-emission vehicle regulation. Since then, Connecticut, Maine, Maryland, Massachusetts, New York, New Jersey, Oregon, Rhode Island, and Vermont have taken their lead and adopted California’s standards through Section 177 of the Clean Air Act. In 2013, the Governors of seven of these states signed a memorandum of understanding (MOU) that established a goal of 3.3 million ZEV on the road by 2025. Additionally, Maine and New Jersey adopted a goal of having 15% of new vehicle sales ZEV. Together with California, these states represent nearly 30 percent of new car sales in the United States. 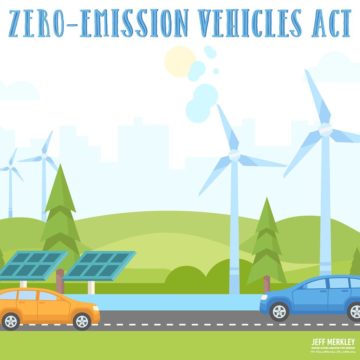 More recently, U.S. Senators Jeff Merkley (D-OR) and Sheldon Whitehouse (D-RI) proposed legislation that would put the whole county on a coordinated path toward 100% zero emission vehicles. On November 28, 2018, the pair introduced a bill to the 115th Congress to amend the Clean Air Act to create a nation zero-emission vehicle standard. The Zero-Emission Vehicles Act (ZEVA) would set a comprehensive federal ZEV standard and require at least 50% of all new car sales in America be zero-emission vehicles by 2030. That number would increase by 5% each year until 2040 when the 100% goal is reached. According to the press release, “a bold national ZEV standard would put the U.S. at the forefront of the emerging electric vehicles market, positioning the U.S. to lead in innovation and manufacturing.”

Senator Merkley clearly articulates the need for the ZEVA: “As the National Climate Assessment spelled out in stark, disastrous detail, we have no time to waste in taking on climate chaos. To save our economy and our way of life, we have to aggressively reduce carbon pollution. Since transportation is currently the largest source of carbon emissions in America, we must address that challenge head-on and drive the transition to zero-emission vehicles. This will also make America a leader in clean energy vehicle innovation, positioning us to create great manufacturing jobs right here at home.”

The Federal ZEV standard would include a crediting system modeled after California’s ZEV standards. In a nutshell, manufacturers receive one ZEV credit per all-electric vehicle and Plug-in hybrids and hybrids receive partial credits based on estimated battery miles traveled. Additionally, fuel-efficient vehicles can receive partial credits based on EPA’s estimated fuel savings. Auto-manufacturers who are compliant can sell their credits (to other manufacturers who don’t produce enough EVs) or bank credits for up to 5 years, until 2040. Additionally, revenues from the sales of ZEV credits will pay into the Highway Trust Fund to help support public infrastructure.

After being introduced, the bill was referred to the Committee on Environment and Public Works. In order for further action to be taken it would need to pass Committee and the full Senate, then the House and be signed by the President.

Moving Forward
Although there is not a high probability it will become law, it serves as model legislation that has been demonstrated at the state level as effective in increasing the volume and speed that electric vehicles are brought to the market. Pro-EV policies are critical to moving the needle in reducing carbon pollution and strengthening and re-aligning American auto manufacturing to reflect domestic and global demand for cleaner transportation.

The Southern Alliance for Clean Energy supports actions like these that will decarbonize our transportation system. Visit our clean transportation page to learn more about our work in the region. Connect with us by signing up, here, and check out our weekly updates of electric vehicle news, here.

For more information about the ZEV Act please see the press release, here. To send a letter in support of the ZEV Act find your Senator, here.