A recording of today’s telepress conference can be accessed here.

Tallahassee, Fla. (May 16, 2018) – A week after a 2018 electoral filing deadline, the nonpartisan government watchdog group Integrity Florida released a new report examining the influence that contributions from big power companies have on Sunshine State politics.

2018 Power Play Redux concludes that the Florida State Legislature increasingly set its agenda and policy outcomes based on the directives of large political donors rather than the public interest.

“Campaign and other political contributions from monopoly power companies have greatly increased in the last two election cycles while policy to advance clean energy solutions in Florida, like solar and energy efficiency, continues to lag behind. The updated Power Play report tracks this and will be a helpful reference as the upcoming primary and general election season heats up.”

A few of the key findings of this report include:

Political spending increasing. The energy companies spent more than twice as much in the most recent four-year period than in the previous eight-year period documented in the original 2014 Power Play report.

Lobby expenditures trending upward. Utilities continue to have an outsized lobbying presence in the Florida Capitol, employing more than one lobbyist for every two legislators.

Trade associations used to lobby. While the energy companies are not supposed to use customer profits to lobby, its alleged regulators are allowing them to bypass the ban by paying dues to trade associations that lobby on their behalf.

The entire report can be accessed here: http://bit.ly/FL2018PowerPlay 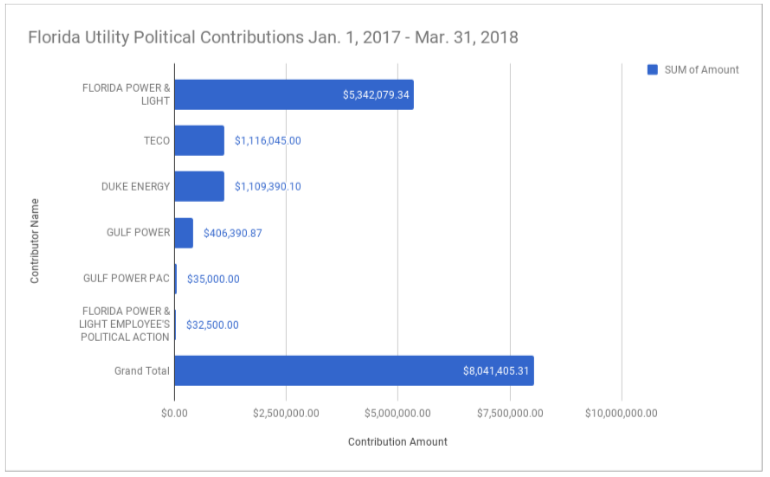 Founded in 1985, the Southern Alliance for Clean Energy is a nonprofit organization that promotes responsible energy choices that create global warming solutions and ensure clean, safe, and healthy communities throughout the Southeast. Learn more at www.cleanenergy.org Learn More
Webinars
Visit our YouTube channel to watch all our webinars.
Care about clean energy? We do!