Over the course of the last few months, thousands of Georgia Power customers have turned out to public hearings and town halls and submitted written comments to the PSC asking them to deny Georgia Power’s over-the-top request for a huge hike in the Company’s monthly fee. One municipality even passed an official resolution opposing the increase in this fee Georgia Power customers must pay before using any electricity.

At issue is Georgia Power’s proposal to nearly double the monthly fee to  $17.95 per month (and actually $23.69 after tacked on charges), which would make it the third-highest fee in the nation among peer investor-owned utilities. As multiple third-party experts have pointed out, the proposed hike is massive compared to peer utilities around the nation; and furthermore, the proposal is based on faulty calculations. Georgia Power is essentially attempting to significantly overcharge customers for basic access to power — before even flipping the light switch. 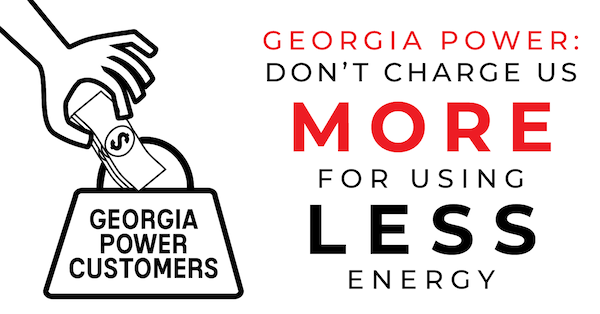 The impacts would be severe: the steep fee hike would take away customers’ ability to control their bills. It would most heavily harm customers who are least able to afford the costly changes, as the fixed charge comprises a relatively larger part of their bills. Similarly, such an increase would disincentivize using energy efficiency methods to reduce energy use, or going solar.

Customers have been steadily speaking up in opposition – their personal stories attest to these looming impact and just how wrong it is for Georgia Power to charge so much money for simple access to electricity.

The PSC has held three public hearings about the rate case over the past ten weeks. These hearings have allowed not only parties in the formal process to participate, but the PSC has also taken public comments. Despite the distance and time required to get to these inconvenient, workday-scheduled holiday-season hearings, more than 30 Georgians from Atlanta and Savannah and in between have shown up to make their impassioned pleas to the PSC to deny the fee hike. These comments, although they only show a sliver of the millions of Georgians who would be impacted by Georgia Power’s egregious fee hike, have made a strong case to the PSC why they should deny it.

Townhall events with PSC Commissioners took place in Savannah, Athens, Atlanta, Kennesaw, and Carrollton, where Commissioners heard directly from Georgia Power customers who are concerned about the impacts of the proposed fee hike. At these events, dozens of customers spoke in opposition to the fee hike, citing difficulty paying power bills already, the unfair nature of hiking the monthly fee, and how customers are already getting nailed with the costs of Georgia Power’s bad decisions on Plant Vogtle.

Dozens of Georgia Power customers hit the streets — specifically across the street from the PSC building — at the conclusion of the PSC hearings on Sept. 30 and Nov. 4. They held signs, spoke on the bullhorn and showed that voters are counting on the PSC to side with the consumers over corporate greed.

See video of the Sept. 30 rally here and the Nov. 4 rally here on the Georgia Beyond Coal Facebook page.

According to a tally by SACE and our partner groups (see list of partner groups below) that have worked with their members to engage in the rate case, more than 3,000 Georgians have submitted comments to the PSC in opposition to the fee hike. You can read a sample of some of the comments that SACE helped deliver in our recent blog post, “Georgia Power Customers Speak Out Against Fee Hike to the Georgia PSC,” showing comment after comment from Georgians describing how the fee hike would exacerbate existing affordability issues with power bills of families earning lower incomes, especially seniors; impede customers’ abilities to control their bills; and take away a good chunk of the payback that customers with solar panels would otherwise have.

See more information about the rate case and many news stories that have come out as a result of customers’ engagement in the matter here.