After learning of the Stop the War on Coal Act, which shockingly passed the House of Representatives a few weeks ago, I began to wonder where all these people (also known as our elected Representatives) were getting the idea that coal was so under siege by the government and that it was in need of help from the legislative branch. As far as one can tell, strict environmental regulations aimed at cleaning up coal plant operations are being aggressively challenged by the coal industry in the administrative and judicial system and when enacted, usually come with weaker obligations than originally proposed. (Think of the recent overturn of CSAPR and the revisited MATS rule, whose legal challenges have been held in abeyance as EPA revisits aspects of the standard.) Despite a devastating coal ash disaster in Kingston, TN in 2008, EPA has yet to finalize any federal coal ash regulations.

While there have been critical gains over the years to help improve air and water quality across our region and nation from coal pollution, there is still a lot of work to be done.  Currently, the true costs of coal are borne by the environment and our public health and are not internalized and included in the cost of coal generation.  By not including the costs to mitigate the amount of pollution released into the air and water, coal is allowed to operate within a market failure.  The only way to address such a market failure is to enact environmental regulations that force dirty coal plants to clean up their operations.  Although more stringent regulations would result in higher operating costs for coal plants, other market factors – such as a current glut of cheap natural gas – are more likely to fuel decisions to shutter dirty, uneconomic coal plants.

So, where is this “War on Coal” rhetoric coming from? Is it just more unfounded propaganda from the coal industry in an effort to elect politicians more aligned with their interests or is there some basis in reality to these claims? A recent report from The Brattle Group illustrates the fact that more coal plant operators are choosing and will choose to retire plants in the future instead of retrofitting these facilities. Coal plants are, in fact, closing their operations more often than in recent history.  The reasons for these retirements, however, cannot be traced solely to stricter environmental regulations.  A clearer understanding of market factors and power demand shifts help explain the decisions behind many coal plant retirements.  As Council of Foreign Relations fellow Michael Levi stated in a recent NPR Marketplace piece regarding the role of coal in the Presidential candidates’ campaigns, “People point to regulation for a lot more than regulation can actually explain.”  Levi went on to explain that the real reason coal is in such bad shape is because of the glut of cheap natural gas.

“Power producers go out there and they say, ‘I have a coal plant and I have a gas plant. I can put cheap natural gas in my gas plant, or I can put coal in my coal plant. The better deal for me financially is to use the natural gas.’ That means there is lower coal demand…”

In their report, the Brattle Group found that 59 GW to 77 GW (depending on more lenient or stricter regulations, respectively) of coal-fired power is likely to retire instead of retrofit with environmental controls, even in the absence of future regulations restricting carbon. The report admits that the results are 25 GW higher than the Group’s previous retirement predictions, but attributes the difference to “lower expected gas prices,” NOT an increase in strict environmental regulations. In fact, two key EPA regulations, the Cross State Air Pollution Rule and the Boiler Maximum Achievable Control Technology (MACT) Rule have been held up in regulation purgatory, reducing the assumed impact of environmental regulations on coal plant operations.  What has happened, however, is that for the first time since 1973, the prices of natural gas and the price of coal equalled each other in April of 2012. This drop in natural gas prices explains why many utilities are beginning to rethink their coal-heavy generation portfolios. According to the U.S. Energy Information Administration:

“coal consumption by the U.S. electric power sector in 2012 is expected to fall below 900 million short tons for the first time since 1996 as the electric industry increase[s] its use of natural gas for power generation.”

In 1985, coal accounted for 57% of all power generated in the United States.  As of 2011, that number was down to 42% of annual power generation according to a BloombergBusinessweek Article.  For a more local perspective, we can look to Southern Company’s generation portfolio, which was made up of 70% coal-fired generation in 2008.  In 2011, that number had shrunk to 32%.  During the same time frame, Southern Company increased its gas-fired generation from 16% to 46%.  The increasingly cheap price of natural gas and the glut of natural gas from the environmentally-suspect practice of hydraulic fracturing pose more of a threat to the future of coal than any environmental regulations currently proposed.  EIA predicts that 60% of new power used between 2011 and 2035 will be from cheap natural gas. 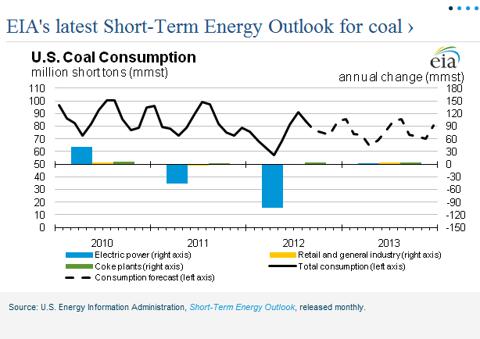 In today’s market, only a scant few of the externalities of coal are internalized into the cost of burning coal for power.  We will continue to pay the price of “cheap coal” at the hands of utilities running dirty coal plants and those who seek to forever extend the lives of these polluting dinosaurs, unless we enact stricter environmental regulations.  Undoubtedly, such environmental regulations will cause some plants to retire instead of installing expensive pollution controls.  But while some call this attempt to have utilities reduce the amount of carcinogens and harmful pollutants they emit a “war on coal”, we call it “fixing a market failure” and “protecting the public health.”  Cheap, abundant natural gas, however, will remain the primary driver of coal retirements for the foreseeable future.  And natural gas is quickly finding its way into the market (not without other concerns for the environment), coal is increasingly fading into the background of our domestic generation portfolio – which helps us all breathe a little easier.

Read more on coal trends in the Southeast – Editorial: Air should improve as coal loses grip on TVA Kingdom and Coal no longer  king in TVA region as more gas-fired plants used to generate electricity.