The Southern Alliance for Clean Energy, in partnership with the City of St. Petersburg, Florida, has a goal of having 500 St. Petersburg residents test drive an electric vehicle by the end of 2020, and earlier this week U.S. Congressman Charlie Crist was among the first St. Petersburg residents to take a test drive as part of this initiative. Congressman Crist was joined by St. Petersburg Mayor Rick Kriseman, Pinellas County Commissioner Janet Long, and Largo Mayor Woody Brown at a Driving on Sunshine ride and drive event, where they spoke about the important role electric vehicles are playing in the transition to clean transportation and what these leaders are doing in their communities to advance electric vehicle policies in Florida.

At the event, Congressman Crist discussed legislation he introduced in Congress earlier this year to extend the solar energy tax credit for an additional 10 years. “Because so much of the problem we have with pollution comes from our vehicles, one of the greatest ways we can stem the tide of that is to have more cleanly-powered electric vehicles,” said Crist. 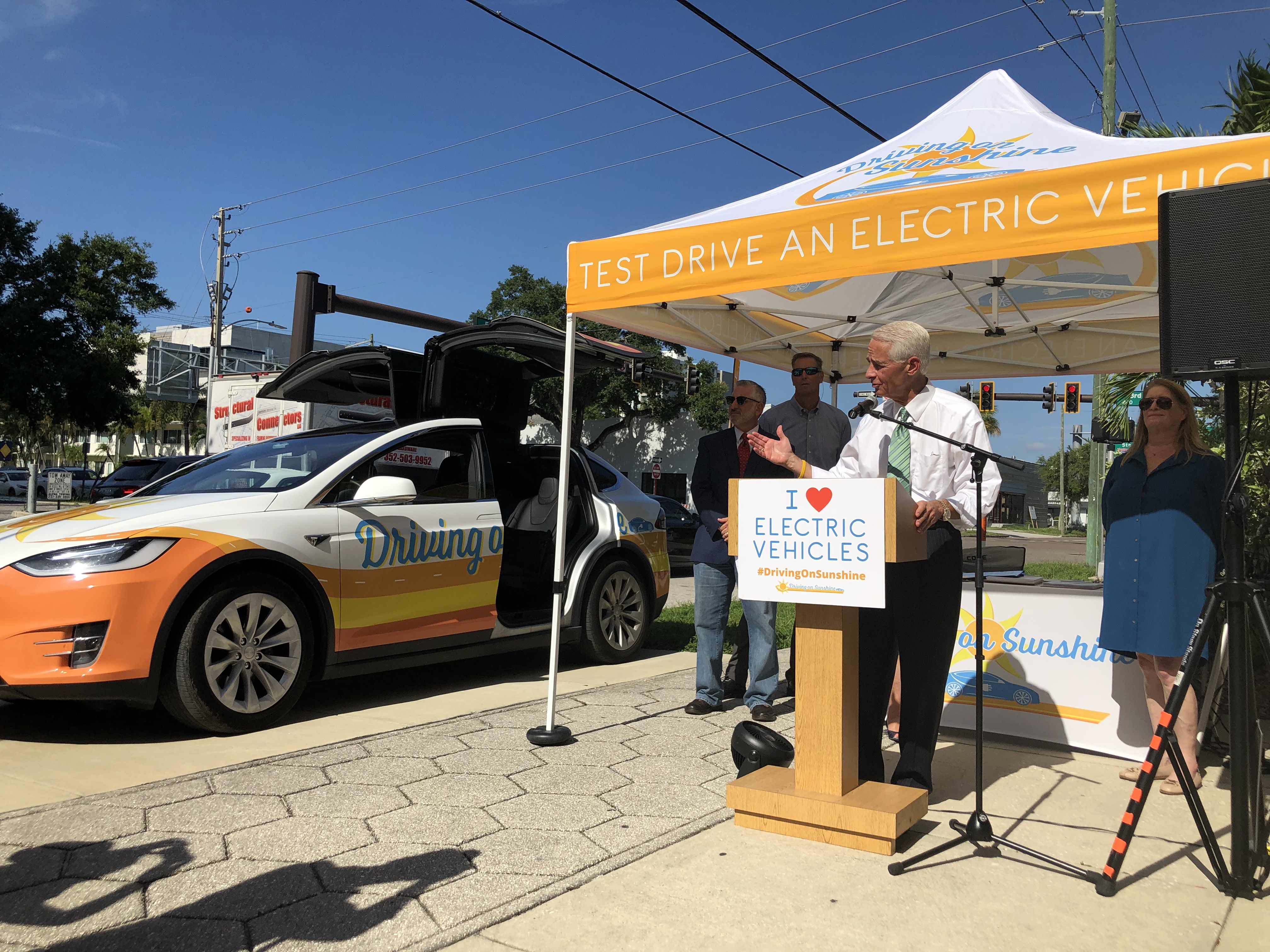 St. Petersburg Mayor Rick Kriseman spoke about St. Petersburg’s commitment to move to 100% clean energy, including transitioning their vehicles to a green fleet. As one of Bloomberg Philanthropies’ American Cities Climate Challenge award winners, St. Petersburg is addressing how transportation is a key part of the city’s approach to reducing its carbon footprint.

“What’s one of the easiest ways that you can have an impact on reducing your carbon footprint? It’s to get out of a gas-guzzling vehicle and into [an electric vehicle],” Kriseman said. “We encourage people to take advantage of every opportunity you have to experience what it’s like to drive one of these things, and I think that once you’ve driven one, you’re going to get hooked, and you’re going to want to have an electric vehicle, not only because it’s fun to drive, but also because of the impact it could have on our community.”

Largo Mayor Woody Brown discussed his city’s efforts to “lead the charge” on electric vehicles by transitioning to a 100% alternative fuel, light-duty fleet by 2030. He also noted that now, the default choice for any light-duty vehicle purchased for Largo will be a hybrid vehicle, and soon the default will be a fully-electric vehicle. In addition, he highlighted the city’s commitment to 100% clean energy and its installation of seven new charging stations in the past year.

The Pinellas Suncoast Transit Authority also participated in the event and brought a fully electric bus operating as the St. Petersburg Downtown Looper — a free service to get around downtown St. Pete.

After making remarks, the elected officials and other attendees went for test drives in fully electric Tesla and Nissan vehicles, and other EVs were available on display for attendees.

The 500 test drives in St. Petersburg are part of the Southern Alliance for Clean Energy’s new statewide Driving on Sunshine electric vehicle roadshow, which launched in July. This roadshow is touring around the Sunshine State, offering Floridians the opportunity to experience the benefits of driving electric firsthand. Attendees at Driving on Sunshine roadshow events across the state will be able to take a spin in a Nissan LEAF hatchback, a Tesla Model 3 sedan or a custom-wrapped Tesla Model X for free.

Through the roadshow, we hope to demonstrate to Floridians how electric cars save drivers money by reducing operating and maintenance costs, offer better overall safety and performance, and help protect our environment and public health. We’re in the process of setting up electric vehicle roadshow events around the state. Stay tuned about upcoming events near you by joining the Electrify the South mailing list and visiting drivingonsunshine.org.

Would you like to help spread the word about the many benefits of electric vehicles? Sign up to volunteer for future events in your area!

By leading the transition to electric cars, trucks, and buses, Georgia can spur economic growth, save money, and create jobs — all while reducing carbon emissions to benefit the climate.

Rest in Peace, Winter the Dolphin

The Southern Alliance for Clean Energy (SACE) wishes to add our condolences for the loss of Winter the Dolphin who died on November 11, 2021, at the Clearwater Marine Aquarium in the…

TVA Board gives away power plant decision-making authority to CEO Jeff Lyash, while also giving him a raise

At the Tennessee Valley Authority’s (TVA) Board meeting on November 10, Board members voted to delegate decision-making authority around the Kingston and Cumberland coal plants to CEO Jeff Lyash, an outspoken proponent…