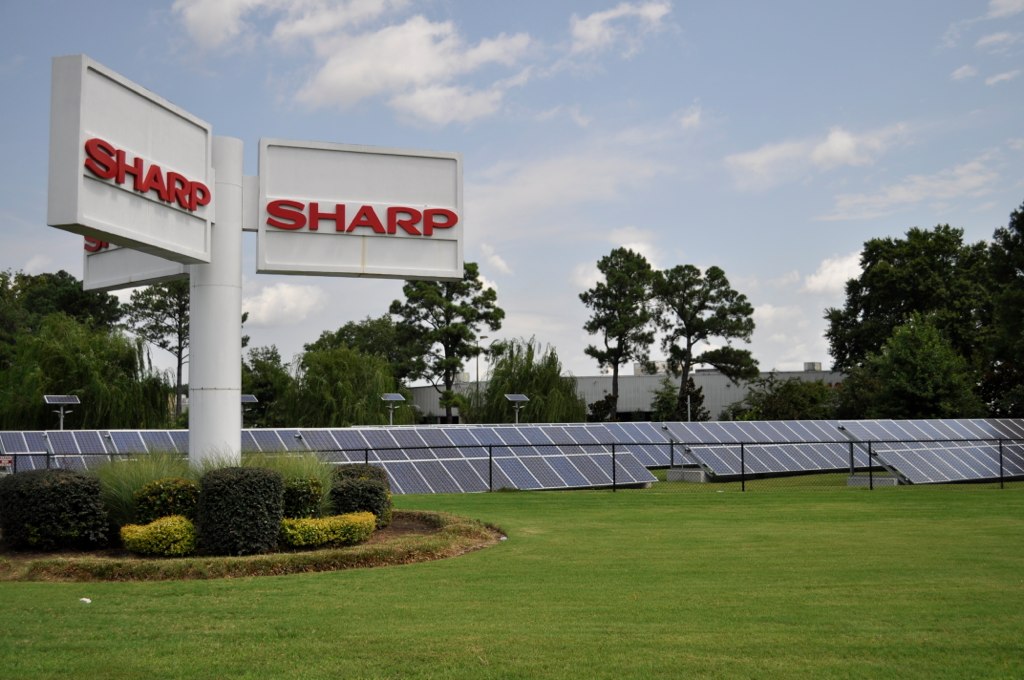 Last week I had the pleasure of touring the Sharp Manufacturing Company of America’s Memphis, TN facility with a few members of SACE staff.  Having used Sharp solar panels for both our Knoxville office array, and on the array installed at my home, it was fascinating to get an inside look at the manufacturing process of the very technology that powers our operations. I was also lucky enough to sit down with T.C. Jones, Sharp Vice President of Human Resources and General Affairs, who talked me through the reasoning behind the decision to bring solar panel production to their Memphis facility. At the top of their list? TVA.

You can watch the video below for a full account of my interview with T.C.:

Sharp’s Memphis facility is an impressive operation and a real boon to our state and regional economy.  The plant’s five solar panel production lines are in full operation 24 hours a day, 7 days a week, and they produce panels at a remarkable rate of 3,000 per day for a total of about 200 MW of solar panels annually.  450 workers are employed on site, about 300 of whom work on solar production (with many of the others working on Sharp’s innovative LED lighting).   Sharp is one of the world’s largest solar manufacturers, and the Memphis plant is a great example of the potential for ‘green’ manufacturing to bring plentiful, high-quality jobs to our region.

In 2003, the company made a calculated decision to begin solar panel production in Tennessee because of the opportunities they saw for their solar business to grow through the region’s strong transportation networks and ample market potential.  Company executives scouted several locations in other regions around the country but ultimately decided on Memphis.  When asked why, T.C. Jones had one simple answer: TVA.

Jones said the Sharp executives weighed their options and decided on Tennessee because TVA not only covers this state but much of the surrounding area, and offered the best opportunity for Sharp to dig into the renewables market and set up a productive relationship with the power provider.   They saw the large market available through TVA as providing great market pull for their product. However, when asked how their vision has worked out so far, Jones replied, “So so”.

Though Sharp set out to disseminate renewable energy throughout the region, the reality at this point is that upwards of 80% of the panels Sharp produces are being shipped to the other side of the world because of a hampered regional market.  Jones reported that Sharp had hoped TVA would be “more receptive to renewable energy.”  The uncertainty in TVA’s solar programs has had a dampening effect on the regional market potential for solar.  Because of the limited solar capacity available, the market hasn’t taken off in the way it has in other regions.  The Sharp facility itself is capped in their own solar installations because of TVA policies that limit the solar capacity available to consumers.

TVA is falling behind its peer utilities in solar development.   As demonstrated by North Carolina’s solar carve-out provision and the recently approved IRP motion by the Georgia Public Service Commission, clear policy goals play a critical role in the sustained orderly development of a solar industry.

The Southeast needs more proactive policies on solar implementation that would allow Sharp and other regionally-based clean energy manufacturers to thrive, and for the region to attract other similar major manufacturing facilities.  Creating an environment that attracts large, clean energy technology manufacturers such as Sharp positions our region to succeed in the economies of the present and the future.  It’s not only manufacturers like Sharp that suffer under the current limited policies, but actors throughout the economy, right down to solar installers who are facing constrained market growth and potential layoffs in the Tennessee Valley, right when solar is taking off in nearby states and throughout the nation.

TVA has an opportunity in this Thursday’s Board meeting to grow the commitment to solar in next year’s budget, which would not only provide the TVA staff with greater flexibility in program and resource planning, but would demonstrate to Sharp and other major manufacturers that the Tennessee Valley and the Southeast is still a viable marketplace for solar and clean energy technologies, one backed by utilities that allow consumers to act on their growing demand for solar power and provide regular and sustaining business to clean energy technology manufacturers such as Sharp.

Sharp Manufacturing Company of America is a prime example of how clean energy manufacturing can help build stronger, safer local communities. SACE applauds their efforts to make American-made, clean energy options more readily available in our region and the world. We hope TVA and other regional utilities recognize the critical role their policy decisions have in attracting (or repelling) more companies like Sharp to the Southeast.