A little over two years after installing a 9.6 kW-dc solar system at SACE’s headquarters in Knoxville, TN, we’ve now got the Asheville office running on solar power from a 7.8 kW-dc (6.9 kW-ac) system, as well! Asheville’s installation was officially interconnected to the Duke Energy Progress grid on May 2, 2014. The system provides an impressive demonstration of solar technology today, including high-performance modules, a dual-axis tracker, and a “smart” inverter with DC optimizers.

Before converting the building to solar power, SACE first invested in numerous energy efficiency measures (see series of blogs from January or and watch this video for a virtual tour!) to reduce the energy needs of our Asheville office since moving in last July 2013. As the building was being made more efficient, we began exploring options for powering our facility with clean energy by enrolling in the Solarize Asheville program (now called Clean Energy for Us). Solarize campaigns have proven extremely effective at lowering costs and complexity for homeowners (and in some cases businesses) interested in going solar. Asheville’s campaign was no exception with over 370 enrolled, at least 50 contracts signed, and over 230 kilowatts installed to date!

The opportunity to leverage solar power in Asheville was a no-brainer, particularly after our success with the Knoxville solar system which has exceeded performance expectations. Our experience in Knoxville and the cost and process benefits gained from the Solarize Asheville campaign motivated us to make our Asheville system a demonstration of the incredible advances in solar technology. Developed by Solarize Asheville’s selected contractor, Sundance Power Systems, the installation at SACE’s Asheville office showcases some of the highest quality and best performing technology on the commercial solar market.

The SunPower (E20-327) modules on SACE’s Asheville installation are rated at 20.4% efficiency, well above conventional modules which tend to hover around 15-16% efficiency. In addition to producing more energy per watt, these modules also pack more watts per square foot! For example, SACE’s modules are rated at 327 Watts, whereas most conventional modules are around 250 Watts (even within a similar size frame). And, these SunPower modules are built to last – ranked 1st in durability, and guaranteed to achieve at least 87% of their initial power production by year 25 (most other companies have an 80% guarantee). SunPower claims the modules will continue to produce at least 70% of that initial power by year 40! As a result of the premium quality in efficiency and durability, these modules will produce 20% more energy per watt and 60% more energy per square foot over 25 years compared to conventional modules.

As if the modules aren’t impressive enough, all 24 of them (laid out on a rack that’s 25’ x 25’) are mounted on a single dual-axis tracking system. The AllSun Tracker uses a built-in GPS system to track the sun for both azimuth and altitude throughout the day… in other words, if the sun is out the tracker will find it and point the modules in that direction. This feature allows the modules to produce up to 45% more electricity than a fixed system of the same size. 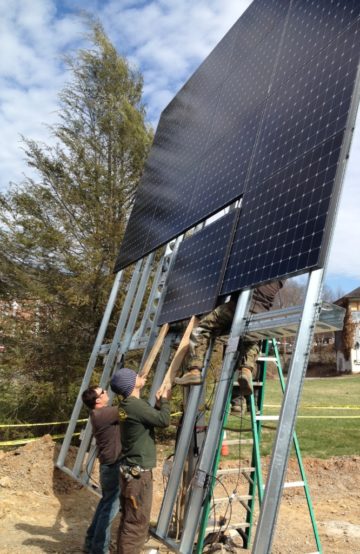 SACE’s new solar system utilizes an efficient SolarEdge Inverter with DC optimizers. Inverters convert the solar energy absorbed by the module from direct current (DC) to alternating current (AC) so that it’s ready to be used by the host and/or sent to the distribution network. Unlike standard inverters which are negatively impacted by the lowest producing module in a system, the optimizers allow monitoring and control over individual modules so that the power output of one module is not compromised by the output of another. SolarEdge also provides a sophisticated web platform where you can view the output of the system – or individual modules – for any period of operation. See the image here showing the total output of each module as of May 22, which can also be viewed live here.

The projected annual output – based on PVWatts – of SACE’s Asheville system is 14,941 kilowatt hours (kWh). Despite being 2 kW smaller than our Knoxville solar system, Asheville will be generating nearly 3,500 kWh more on an annual basis. The projected output equates to about half the average annual energy consumption used by the previous owners/tenants. However, due to the short history SACE has had in the building and all the efficiency improvements that have been made, we’re hopeful the solar system may make our new office a net zero-energy building!

Stay tuned for an update as the numbers roll in and in the meantime, track our solar production here!

A number of issues that we (Southern Alliance for Clean Energy & Southface), and other parties, are concerned about, were either omitted from the Stipulation or otherwise insufficiently addressed.

On May 16, 2022, Duke Energy submitted its proposal for a Carbon Plan to meet goals legislated by HB 951 to the North Carolina Utilities Commission. Here is a summary of what…