Yesterday I flew with SACE board member Enid Sisskin and former board member Michael O’Donovan, a professional photographer. Both are Gulf coast residents with a long history of fighting offshore drilling. We flew out of Gulf Shores, Alabama over the beautiful Gulf of Mexico to the site of this tragic oil disaster, where BP’s drill rig Deepwater Horizon exploded on April 20. The site is located approximately 100 miles from Gulf Shores.

We headed south from Alabama toward the site, where the first oil we encountered was roughly 25 to 30 miles offshore, due south of the Alabama/Mississippi line. The oil in this area looked heavily emulsified and very red in color. Instead of being concentrated in one large area, the oil appeared scattered in a number of different places. As we continued further south, we began to see larger and larger areas of oil in distinct, long streaks that made abstract patterns in the water.

Within 50 to 60 miles from the shore, I began to sense the absolute immensity of the spill. Looking toward the horizon we saw that there were large areas on the surface of the water that appeared to be “smoother” than the natural rippling of the Gulf. 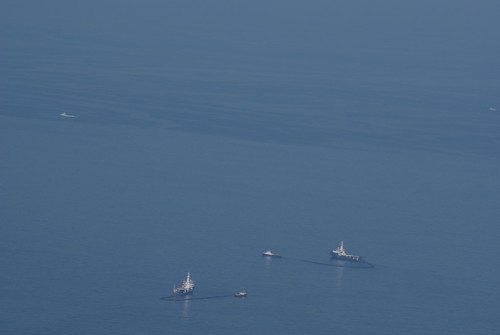 This “smoothing out” occurs when oil on the surface of water changes the normal tension surface (see Weather Underground’s Jeff Masters May 7th blog) that is created when wind and water meet – where ripples and waves would typically appear. Even though we couldn’t necessarily see large amounts of oil on the surface in this area, this change in the way the surface looked from 3,000 feet in the air is indicative of the massive nature of the spill.

“None of the photos or videos have done justice to the magnitude of what I personally saw from 3,000 feet above the Gulf. It was extremely distressing to see miles and miles of tainted waters.” -Michael O’Donovan

We were struck when we noticed that the water around the rig, where the majority of the activity was happening, looked fairly clear. However, looking west toward Louisiana we could see a large amount of very dark, black, highly concentrated oil on the surface. The oil in this area did not have a red hue as the emulsified oil did closer to the coast, but instead had the familiar “rainbow sheen” that one might see in oil runoff in a parking lot. This oil looked much more “fresh” and seemed to be in much higher concentrations, both on the surface and down into the water column. What we saw of this oil extended to the west of the rig site for a number of miles. We could not tell how deep in the water column the oil has gotten. However, what we could see from the air was significant, and we fear there are larger amounts of oil beneath the surface.

“The scope is absolutely monumental and remarkably destructive. Because of all the oil that is likely also under the surface, I think we will be seeing effects of the spill for years to come.” -Enid Sisskin

As we flew away from the rig toward the Louisiana coast and the mouth of the Mississippi River, the oil levels began to look more intermittent, and there were gaps where we did not see much oil. However, we did see more long streaks of emulsified oil in this area. As we moved closer to the Louisiana coast, we saw fewer ships and boats skimming the oil, and no boats or ships south of the Alabama/Mississippi line. It was disheartening to see that where skimming needs should be most urgent – near the wetlands and the coast – they were obviously not.

We did not fly west of the mouth of the Mississippi due to weather and daylight. However, we did fly over the Chandeleur Islands and did see some indication that there was oil, though it did not look as heavy as we had expected.

My fear is that we are seeing the “tip of the iceberg” with the worse oil concentrations driven below the surface because of the toxic dispersants.

As I walked the beautiful beaches in Orange Beach, Alabama this morning, where children were playing and large numbers of people were enjoying the beginning of the Memorial Day weekend, I was struck by the profound juxtapositions and ironies. Unaware of the potential ruinous oil 30 miles offshore, people are on the beaches during a holiday established to remember our men and women who have died for our country, yet many of the recent conflicts have deep ties to oil in the Middle East. Many of the families that drove to enjoy the beaches did so in inefficient cars and SUVs that fuel our addiction to both offshore oil drilling in the Gulf of Mexico and oil-sponsored terrorism destabilizing the Persian Gulf and larger Middle East region.

All of us need to look at how we can reduce our consumption of oil products.  We also need strong leadership to support a clean energy future not just spew oily empty rhetoric.

To see the full set of pictures taken during the flight, click here.

Stephen Smith
Dr. Stephen A. Smith has 30 years of experience effecting change for the environment. Since 1993, Dr. Smith has led the Southern Alliance for Clean Energy (SACE) as its executive…
My Profile
FacebookInstagramTwitter

Ten years ago today, hundreds of thousands of gallons of crude oil were gushing into the Gulf of Mexico from BP’s Macondo oil well, following the Deepwater Horizon drilling rig’s catastrophic and…

On Tuesday, Knoxville Mayor Indya Kincannon's newly formed Climate Council convened for the first time in what will be a months-long process to develop a plan to help the city meet its…

OUC's low income program is projected to reach less than 1% of eligible customers. Energy savings for Orlando's families must be part of the City's clean energy plan.