This blog was originally published on April 5, 2019 following the conclusion of the the multiple Public hearings across South Carolina. It has been updated to reflect the unanimous ruling from the South Carolina Public Service Commission (PSC) to scale back the rate hike. Read our statement on the ruling.

Duke Energy is proposing to raise its South Carolina customers’ bills, partly through a large increase in the mandatory monthly fee. This mandatory fee must be paid by customers every month no matter how much or how little electricity they use, meaning customers lose the ability to control their utility costs by adjusting their usage. So it’s no wonder that Duke Energy customers have responded in force to oppose the fee hike.

According to the Public Service Commission (PSC) dockets for the Duke Energy Carolinas and Duke Energy Progress rate cases, more than 1,100 customers have submitted letters of protest and an additional 500+ have signed a petition against the fee hike. And when the PSC hosted public hearings in recent weeks, more than 1,000 customers turned out to help convince the PSC to deny the fee hike. 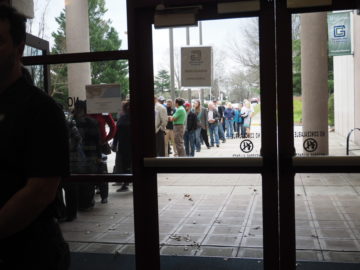 Overall, there were five public hearings—in Spartanburg, Anderson, Greenville, Florence, and Sumter. Each hearing was extraordinarily well attended with 4 of the 5 hearings having standing-room only and lasting for 3 or 4 hours. In fact, so many customers attended the meetings that many people who showed up to give comments had to leave before their name was called to speak because the wait was so long. Several of the meetings were so packed that hundreds of customers never even made it inside the rooms. For example, more than 180 customers attended the hearing in Florence but the meeting room only had seating for 65 or so. At the hearing in Greenville, the fire marshal was hard at work, making sure that the room did not exceed fire code capacity, while an estimated 150-200 people waited outside.

As customers spoke up, one-by-one, some common themes emerged, heard throughout all of the hearings. Here are three of the most prominent themes I heard at the hearings:

In addition to these three themes heard throughout the series of hearings, the Florence hearing brought a unique angle not heard at the Upstate hearings: that farmers will be greatly impacted by the fee hike. A number of farmers and agriculture advocates spoke up about how farmers often have a separate meter for each of their pivot irrigation systems, which means that they would have to pay the increased monthly fee for each meter. Several farmers said they had 5, 10, or more accounts with Duke and would be looking at paying hundreds or thousands of dollars more per year. And while Duke would charge the monthly fee for 12 months of the year, often the irrigation is only used for a few hot months of the year.

To sum up the general sentiment of what I heard from customers at the hearings, I’d probably say it was that Duke isn’t focused on its customers, many of whom can’t afford the hike, but is rather too focused on making profit for its shareholders and highly-paid executives  at the expense of customers.

Duke has heard and responded—in part—to the concerns that customers have raised through their comments and have agreed to scale back their proposed fee hike for residential and small business customers. But the reduction doesn’t go far enough.

SACE continues to be concerned because Duke Energy’s proposed fee hike is based on a faulty method of assigning costs to customers so that they are charged more than it actually costs just for basic access to power. Duke’s ill-conceived notion — that the utility is entitled to make customers pay more for basic access to electricity than it actually costs to provide that access — must be rejected.

See SACE’s live tweeting from the hearings to see photos and hear comments from customers: