North Carolina's wind energy moratorium expires on Dec. 31 while a project is poised to deliver economic development and clean energy to the state. 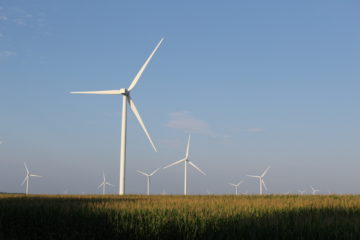 While The Ball drops in Times Square, political barriers blocking clean energy will also be dropping in North Carolina as the state’s wind energy moratorium expires. Passed into law in summer 2017, the 18-month moratorium froze development of wind energy projects in North Carolina, in order for a few state legislators to score political points, while leaving local communities out in the cold instead of receiving the economic development of wind energy. Now that the ban is being lifted, one project in eastern North Carolina could become the second wind farm in the area to provide clean, renewable energy and jobs.

The wind farm ban was passed under very suspicious circumstances, when several anti-wind state legislators claimed to know what would impact local military operations better than the military itself. Even though the Department of Defense (DoD) is thoroughly involved in approving any wind farm construction, and DoD-commissioned studies carried out by MIT show that properly-configured wind farms are compatible with military operations in eastern North Carolina, the anti-wind legislators imposed the 18-month moratorium supposedly to get a better understanding of the impact of wind farms on military operations.

However, Representative Bob Steinburg, who actually represents the area where wind development is focused in North Carolina, said about the moratorium: “There is no one anywhere in the military who has gone on record stating that they have any problems with wind energy,” and that wind farm opponents are “using the military as a straw man.” “I am totally pro-military and I would never support any renewable project that was going to impede the ability of our military to function in any way.”

North Carolina’s first wind farm, the Amazon Wind Farm North Carolina – Desert Wind, began delivering power to the grid two years ago, before the wind moratorium was imposed, so its experience can be instructive as to how wind energy impacts eastern North Carolina. I visited the Amazon wind farm last summer and got to learn first-hand how it is affecting the community, which you can read about here and in the video below. In sum, the Amazon wind farm has served as a major stepping stone to a more prosperous future for the area. Hundreds of workers came to the area during construction, providing a multimillion dollar boon to local businesses, and now that construction is complete, the wind farm is paying hundreds of thousands of dollars in lease payments to farmers, helping to keep farming profitable and the land agricultural. In addition, the wind developer is now the largest taxpayer in the two counties it operates in, meaning hundreds of thousands of extra dollars per year to spend on schools, emergency services, and infrastructure.

While there were some serious concerns about the Amazon wind farm before it was constructed, experience over the past two years has shown that essentially no downside that was envisioned has actually come to pass. As for the national security concerns, MIT conducted a follow-up study after the Amazon wind farm was up and running and found that their pre-construction screening and projections of impact levels were accurate and DoD’s sign off on the project was fair. The bottom line is that DoD did not need the interference of anti-renewable energy legislators to maintain military readiness.

Sadly, the moratorium seems to have killed one of two additional proposed wind farms in Eastern North Carolina, depriving the community of hundreds of thousands of dollars, but fortunately the other proposed project in the area, Timbermill Wind Farm, plans to march forth after the wind ban is lifted.

SACE supports responsible wind energy development to protect our region’s water and air resources and bring clean, renewable energy to the Southeast. You can read more about our ongoing advocacy and support our work here.

Earth Month Reflections on the Urgency of the Climate Crisis

No more snooze buttons: The time to act is now and the future we envision is possible.

Today marks the launch of SACE’s 2022 annual campaign! Today we are celebrating our members and supporters, and reaching out directly to engage you and gather your commitment to join us in…