Amendment 9 will prohibit drilling for oil or natural gas in Florida’s state waters and include tobacco vaping in the existing prohibition of tobacco smoking in enclosed indoor workplaces. Learn more at www.yeson9florida.org

What offshore area would Amendment 9 cover? 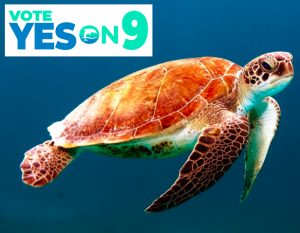 Florida currently has prohibition in state statute against drilling in state-owned waters, but laws can be undone, and in 2009, the Florida House of Representatives voted to lift drilling ban. This measure was introduced under highly irregular circumstances with eight days left of the 60 day regular session. The proposal received very little discussion and was pushed through. Fortunately, the Florida Senate did not comply and the measure died.

Why does this belong in the Constitution?

The 2009 vote to lift the existing near-shore ban demonstrates why we need greater protection in the state constitution. Laws can be changed and our tourism economy, jobs and natural environment are too important to be left to political whims.

In 2002, when the workplace smoking ban was placed in the Florida constitution by 71 percent of voter approval, vaping technologies did not exist. Amendment 9 would simply update an already existing constitutional protection for the health of people in the workplace so they are not subjected to second-hand smoke or vapors. See the American Cancer Society Cancer Action Network Yes on 9 site here.

There is a potential for some job and revenue creation associated with offshore drilling, however, any jobs created by offshore drilling would pose a direct threat to the jobs of hundreds of thousands of Floridians who work existing jobs in fishing and coastal tourism industries that rely on oil-free waters and a clean coast. Saltwater recreational fishing generates $8.0 billion annually and supports 114,898 jobs, and Florida’s commercial fisheries generate $17.7 billion of sales, $3.3 billion of income, and $5.9 billion of value-added and support 92,858 jobs, including imports.

In 2016, out-of-state visitor spending in Florida reached a record $112 billion. Visitors generated $88 billion, or roughly 10 percent, of Florida’s total Gross Domestic Product (GDP), and visitors generated $11.6 billion in state and local taxes. Additionally, an analysis shows that oil drilling and tourism don’t mix. Coastal counties on the Gulf coast without pipelines and refineries generate twice as much tourism revenue per capita as counties with such infrastructure.

Why do we care about state waters when the big threat is offshore?

Putting a ban on near-shore drilling in the state Constitution would send a very loud message to our policy-makers that Floridians want to protect our coasts from the ravages of oil and gas extraction and the pollution that it would bring in the process and resulting infrastructure.

The threat of drilling expansion in federal waters is real, and the Trump Administration has announced its intent to open all U.S. coasts to drilling.

How else will we get energy?

The United States has massive oil and gas resources that are more economical that drilling off of Florida’s beaches. There is simply no need to open pristine areas for additional drilling.

The future of the transportation sector is widely seen as electric. Electric vehicle sales are expected to surpass 50 percent of new vehicles by 2040, and this rapid uptake of electric vehicles will dramatically reduce global oil demand. A recent American Automobile Association (AAA) survey found that 20 percent of Americans are likely to make their next car electric. Royal Dutch Shell, a major oil and natural gas development company, estimates that global oil demand may peak in the 2020s and decline thereafter. As electric vehicles take over the transportation sector, and the demand for oil is reduced, it makes sense that we amend the Constitution to ensure a permanent solution.

What can I do to help Amendment 9 pass?

Spread the word on social media: The oil industry is spending lots of money to expand drilling, so take a few seconds to share this fun, educational video on Facebook so that your friends and family know to vote YES on 9! Find more resources via our social media toolkit here.

Byhalia Pipeline is contrary to the future we need

After years of decline, Dominion Energy has turned a corner and is slowly increasing its annual efficiency savings - but the Public Service Commission is pushing the utility to move much faster…

Duke has outperformed its regional peers on efficiency for many years now, and in many ways is the best positioned to build on its past performance to reach new levels in the…