The Florida Department of Environmental Protection (DEP) just released a Draft Beneficiary Mitigation Plan for the Volkswagen Settlement funds that aims to reduce emissions of NOx, particulate matter, and hazardous air pollutants. But the draft plan lacks details and leaves room for the money to be spent on polluting fossil fuel-powered buses instead of cleaner, healthier electric transit and school buses. Comments must be submitted to Florida DEP at [email protected] by 5:00 PM EST, Friday, August 16, 2019.

In July 2016, Volkswagen (VW) agreed to a multiple-part settlement with the Environmental Protection Agency as a result of the illegal installation of ‘defeat devices’ on their diesel engines in violation of the Clean Air Act. One key program of that settlement is a $2.7 billion dollar Environmental Mitigation Trust Agreement (EMT) that offers emissions reduction opportunities for states. The EMT is designed to reduce nitrogen oxide (NOx) emissions where cheating VW diesel vehicles operated, and funds are allocated among beneficiaries (states) based on the number of impacted VW vehicles in their jurisdiction. Under the EMT, each state was eligible to become a beneficiary and designate a lead agency to prepare and submit to the Trustee (Volkswagen via Wilmington Trust) a Mitigation Plan before funds could be distributed to the state.

On July 17, 2019, Florida became the last state in the country to release their Draft Beneficiary Mitigation Plan by the designated lead agency, the Department of Environmental Protection (DEP). The plan’s primary stated goal is to reduce emissions of NOx, particulate matter, and hazardous air pollutants, and outlined three priorities to achieve this goal:

The DEP also laid out which eligible categories they would allocate the $166 million funds to. The majority of the spending (70%) has been earmarked for transitioning our transit, school and shuttle buses, followed by funding the conversion of old diesel equipment under the Diesel Emissions Reduction Act (DERA). The plan also carves out the maximum amount allowed (15%) for electric vehicle charging station infrastructure.

What is not clear in the plan is how DEP will prioritize spending for the bus and charging station infrastructure components. The draft plan is fuzzy, lacking details and leaves room for the money to be spent on polluting fossil fuel-powered buses. We need to ensure that the money is spent on cleaner, healthier electric transit and school buses and NOT on buses powered by fossil fuels. We therefore recommend that DEP add the following details on how the bus project prioritization will occur:

Additionally, there is ambiguity in the plan regarding “the lowest cost per ton of pollutants reduced” referred to in priority number 3. In reality, electric buses are cheaper to run and maintain, saving over $300,000 over the lifetime they are in service for transit buses and $50,000 over the lifetime they are in service for school buses. Figure 13 in the draft plan does not address the total cost to own — only the procurement cost. This skews the emissions benefit/cost ratio to make diesel seem a cheaper option (when, in fact, it is not). Diesel buses also do not reduce emissions as significantly as electric buses. Unit cost of the buses should factor in lifetime costs of the vehicles. Additionally, a correction to the cost of electric buses needs to occur (i.e. the cost is listed at $900,000 and should be $700,000), and that cost is much closer to parity as the electric bus batteries can now be leased. 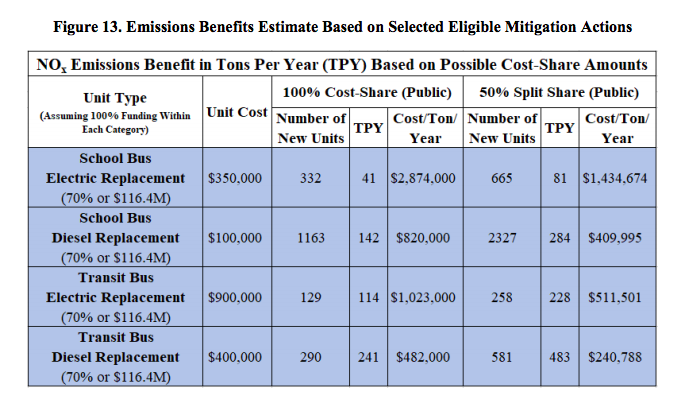 The plan is also lacking details on how the funds will be spent on electric vehicle charging station infrastructure. There is no breakdown of prioritization for Level 1, Level 2 or DC fast charging. Governor DeSantis just weighed in on the issue by announcing a plan to significantly expand Florida’s electric vehicle infrastructure through increasing the number of charging stations along major thoroughfares throughout the state. This is encouraging and points to the direction DEP may be going, but without it clearly defined in the plan, there is confusion.

This plan has the potential to establish Florida as a firm leader of electric transportation in the Southeast. However, the details will determine to what extent the money is used to turn VW’s pollution disaster into an immense opportunity to clean up our air and propel us into a future that substantially reduces pollution from transportation.

Tell the Florida DEP that Floridians are all-in on electric transportation! Encourage the DEP to clarify the draft plan and to include details that ensure the money will be spent on electrification and not dirty fossil-fueled buses. The deadline to email comments to Florida DEP is 5:00 PM EST, Friday, August 16, 2019. Send an email here.

Stay tuned for more stories about driving electric on our blog, and be sure to join our Electrify the South newsletter list for the latest news on EV technology and policy!

By leading the transition to electric cars, trucks, and buses, Georgia can spur economic growth, save money, and create jobs — all while reducing carbon emissions to benefit the climate.

Rest in Peace, Winter the Dolphin

The Southern Alliance for Clean Energy (SACE) wishes to add our condolences for the loss of Winter the Dolphin who died on November 11, 2021, at the Clearwater Marine Aquarium in the…

Beyond money and jobs, electric cars and trucks are important for our health and the health of our children, who are especially affected by pollution.