This is a guest post by Taylor Allred, Executive Coordinator for South Carolina Interfaith Power and Light (SCIPL). The post was originally published on SCIPL’s website here. 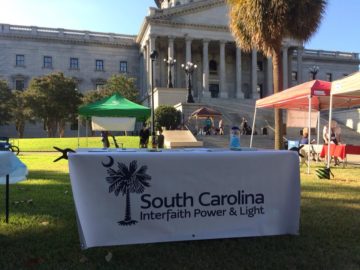 South Carolina Interfaith Power & Light is committed to organizing people of faith to take action on climate change because we see that it is really no longer a debate over science but over morals. With new reports upholding some of the worst climate change projections, we recognize that we have very limited time to mobilize collective action to avert some of the most destructive consequences.

We believe that faith communities provide an invaluable framework for contemplating the immorality of the societal causes and impacts of climate change, for fostering self-care and a collective will to act, and for activating a potent organizing capacity that has achieved meaningful change in moral struggles like the Civil Rights Movement. Appealing to faith communities is especially important at this time in our country, when ideology increasingly trumps facts in political decision-making.

Climate change presents a profound and unprecedented moral challenge to humanity. Countless lives and the continued existence of large-scale civilization are very much at stake. This crisis is disproportionately caused by the wealthy, and it disproportionately impacts the poor, people of color, children and other marginalized groups.

In addition, because of the anticipated global political upheaval driven by struggles over dwindling resources and massive migrations of refugees, climate change significantly exacerbates the looming threat of nuclear apocalypse.

While the prophets of past millennia did not anticipate climate change, they did lay out timeless moral foundations for respecting the value of human life and standing up against systemic injustice in defense of those the Christian Gospel of Matthew refers to as the “least of these.” Our diverse religious traditions reject the precept that might makes right, and they have served as a crucial check on the power of despots and oligarchs throughout history. It is a grave responsibility of the faith leaders of today to use their influence to build up the will to act on climate change.

A popular adage tells us that the first thing you should do when you find yourself in a hole is to stop digging. Through the Paris Agreement, most of the world has agreed to work together to do something to mitigate climate change – not nearly enough, but at least it’s something. However, the United States, the most powerful country in the world and historically the single greatest contributor to climate change, stands alone as the only sovereign state refusing even to slow the rate of its voracious digging. With renewable energy now beating fossil fuels on cost, and energy efficiency improvements offering even greater cost saving opportunities, this obstinacy depends on public deception and the fossil fuel industry’s interference in our endangered democratic institutions.

Successful mitigation depends on global cooperation. Like the rest of the Deep South, South Carolina is a stronghold of both political support our country’s refusal to act, and a widespread cultural commitment to organized religion and its influence on politics. As a result, we now find ourselves in a pretty unusual situation where the response of our local faith communities to climate change could have an enormous impact on the future of our species and all other living beings.

Thankfully, faith leaders around the world have been making serious declarations and commitments regarding climate change. Pope Francis wrote in the 2015 papal encyclical Laudato Si that climate change demands a new and universal solidarity, and cannot be solved by technological or market forces alone. Large groups of leading Muslim, Jewish, Buddhist, Hindu, Sikh, Baha’i and other faith leaders across the globe have also issued statements calling for international cooperation to mitigate climate change.

In the US, many of the leading Protestant denominations have made official declarations on climate change, including the United Methodist Church, the Episcopal Church, Presbyterian Church USA, the Evangelical Lutheran Church of America, the United Church of Christ, and the Southern Baptist Convention, which is the largest denomination in our state by far and the country’s second-largest denomination after the Catholic Church.

A broad consensus has finally emerged among faith leaders, but simply acknowledging climate change is not enough. It’s time for us to hold our local faith communities accountable for taking bold action to prevent the worst potential impacts of climate change. We need persistent activists who can reach these communities in a way that can inspire political transformation.

This work can be taxing, but within our faith traditions, we can also find messages of hope and the spiritual tools for self-care we need to stay effective as activists. Meditation, prayer, intentional gratitude and healthy living can help us to stay resilient and motivated. It’s also crucial that we lead by example by reducing our own carbon footprints, while mindfully avoiding the spiritual poisons of consumerism, vitriol and cynicism.

When done right, activism can foster happiness and satisfaction. Zen master Thich Naht Hanh has said, “Activists have to have a spiritual practice in order to help them to suffer less, to nourish the happiness and to handle the suffering so they will be effective in helping the world.”

The time to rise up for a livable climate is now. Whether you are a person of faith or not, we would love to have you join us at South Carolina Interfaith Power & Light so we can help lead our state to act on climate change and support each other as individuals in the course of the struggle.