This blog post is the second in a new series by SACE volunteer Dave Erb intended to dispel some of the mis- and disinformation which dominate the public discourse about electric vehicles (EVs).

It’s demoralizing how often people assert that no one should buy an electric vehicle (EV) until the power company shifts to renewables. As I mentioned in my previous post, their confusion is understandable, given the intensity and pervasiveness of FUD campaigns. However, before examining those, we need to look closer to home.

Some of the most pernicious resistance to EVs comes, not from cynical merchants of doubt, but from misguided progressives who presume that EV charging will necessitate increased coal consumption. Foolishly, they’re prioritizing a weak third-order effect (increased EV usage increasing electricity consumption, leading to the possibility of increased pressure for more coal plants, leading to the possibility of new coal plants being built or old ones remaining open) over a strong first-order effect (increased EV usage reducing overall energy consumption and emissions). Bad idea.

Here’s the cold, hard reality: Automobile production, like renewable energy, takes decades to ramp up, and nobody commits billions of dollars to design a new car until they’re confident of enough demand to sell it profitably. We don’t have time to solve these problems sequentially, to wait until the final nail is driven in King Coal’s coffin before we start building demand for EVs. If we don’t reduce all fossil fuel consumption, quickly, we’re toast. Fortunately, EVs will hasten the transition.

A Tale of Two Tales

Quantifying the environmental impact of EVs is challenging because the world is so complex. It matters where you charge, when you charge, how the grid responds to marginal demand changes and many other factors. Nonetheless, researchers and policymakers established decades ago that shifting to EVs reduces noxious emissions (criteria pollutants). A few thousand stationary power plants are far easier to keep clean than several hundred million mobile vehicles.

More recently, the focus has been on EVs’ greenhouse gas (GHG) impact. The Union of Concerned Scientists (UCS) published an EV GHG report in 2012, shortly after mass-market EVs appeared at dealerships. The UCS analysts recognized that, while it’s theoretically possible for electricity generated at a hydroelectric dam in British Columbia to power the neon lights in Miami, that’s not how things really work in practice. The grid is most appropriately viewed as a group of regional sub-grids, each with its own mix of generators and protocols for dispatching them as demand varies. UCS analyzed the GHG emissions associated with charging a typical EV in each of those sub-grids.

In displaying the results, UCS took advantage of basic chemistry. Burning any hydrocarbon fuel mainly turns hydrogen into water vapor and carbon into carbon dioxide. If you know the fuel type and how much went in, you know how much CO2 came out. So, after computing the GHG emissions associated with EV charging in each sub-grid, UCS drew a color-coded map showing the fuel economy (in miles per gallon, mpg) that gasoline cars would have to achieve to match them. The lightest of three blue shades indicates 51 mpg or more, better than the best hybrid on the market at the time of the report. 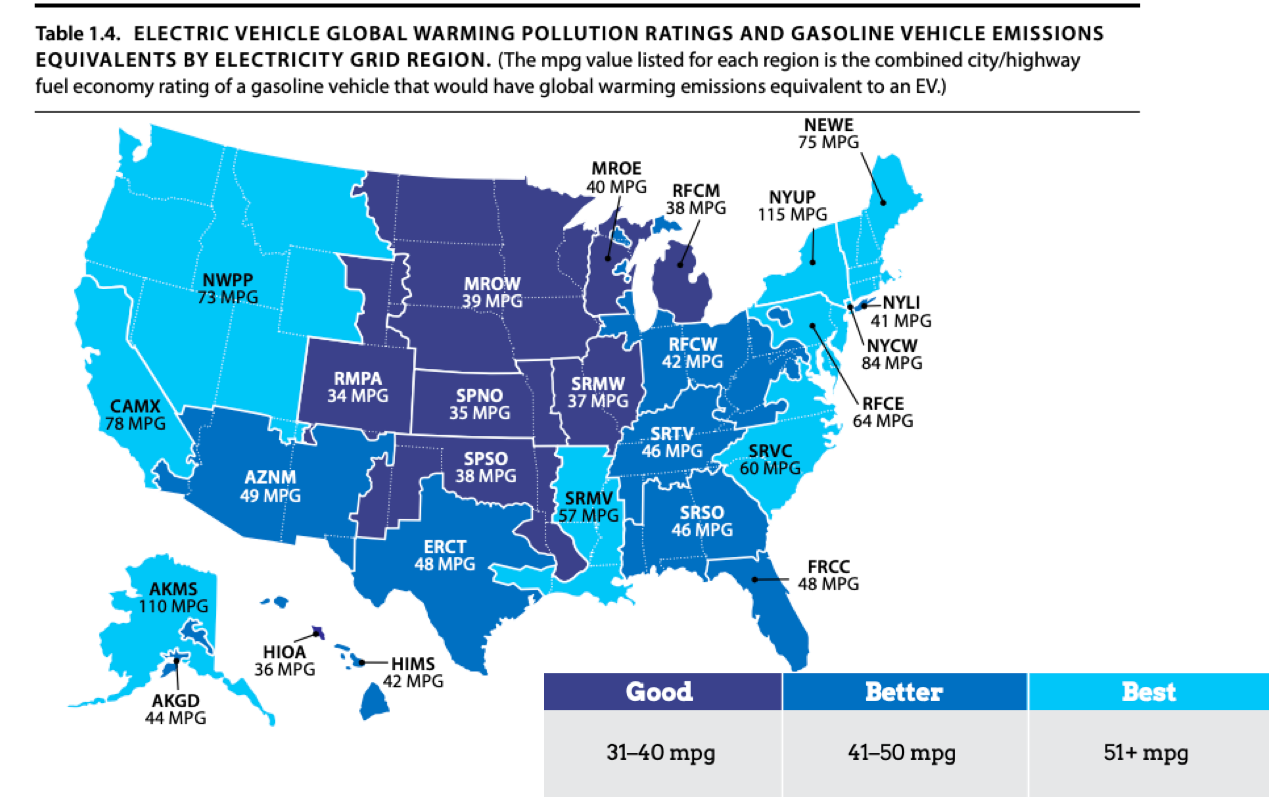 This map shows clearly that EVs represent a dramatic improvement. The gasoline fuel economy in the worst sub-grid (34 mpg) indicates that EVs there emit about three-fourths as much GHG as the average new internal combustion vehicle (ICV). The best region shows 115 mpg, one-fourth the average new ICV’s GHG emissions.

You’d never have known it from the media coverage, though. Most articles and broadcast pieces about this report focused on the lightest blue (cleanest) regions, and put a strongly negative spin on them. They implied that EV drivers were too stupid to know that, in all but a few states, driving a hybrid would be “cleaner” (with the unstated presumption that we ignore criteria pollutants). None of these hatchet jobs adequately acknowledged that most EVs are sold in the cleanest sub-grids. But their most egregious sin was in completely disregarding one of UCS’ main points: the grid is getting cleaner.

Everything’s Up to Date, Even in Kansas City

Electric utilities aren’t asleep, and neither is UCS. Since that first report (which used grid data from 2009, the newest available at the time), UCS has revisited the analysis using data from 2012, then 2014, then 2016. A map from their latest report, based on 2018 data, is shown here. Notice any difference? 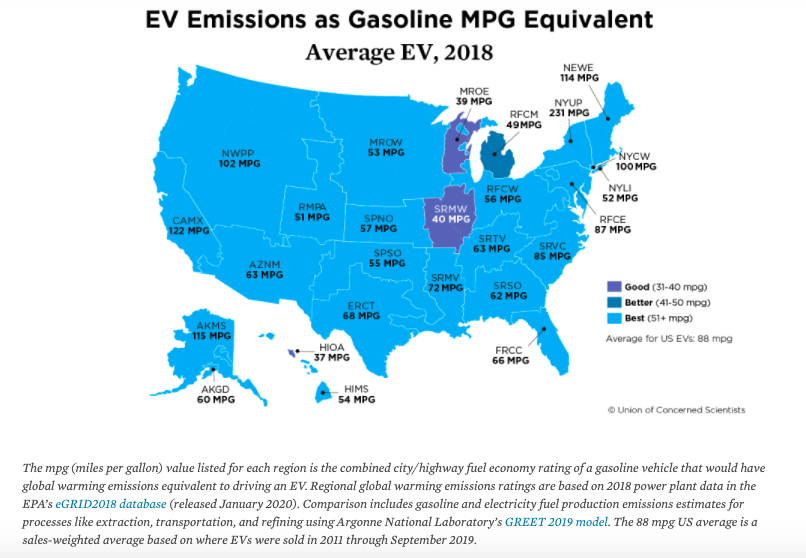 EVs, like chameleons, instantly adopt the color of whatever grid charges them. Look at those UCS maps. Pay attention to the improvement in only nine years. Consider that the newest map is already two years out of date. Then recognize that the average car on American roads is 12 years old, which means that the generating mix that best reflects the lifetime emissions of a new 2020 EV won’t be on the grid until 2032. By then, even involuntarily retired coal barons should have solar panels on their roofs.

EVs are already significantly cleaner than ICVs, today. Unlike ICVs, EVs get cleaner as they age. Still making excuses for buying yet another ICV? Tune in for the next post in this series.

Note about this blog series author, Dave Erb: In a four-decade automotive engineering career focused on energy and emissions, Dave developed vehicles using gasoline, diesel, biodiesel, alcohol, natural gas, electric, and hybrid-electric powertrains. From 1995 to 2004, he created and taught a three-day professional development short course on “Design of Hybrid Electric Vehicles” for the Society of Automotive Engineers. He is the author of Chapter 1 of “Driving to Net 0: Stories of Hope for a Carbon-Free Future,” a collection of 15 first-person accounts of families pursuing sustainability by combining solar houses with electric vehicles, and a volunteer with the Southern Alliance for Clean Energy.