“The U.S. Has 1 Million Electric Vehicles, but Does It Matter?” The article includes a summary of the current dire need for EVs as a solution to decarbonizing our transportation sector, the global market summary, manufacturer sentiment, and how local leadership can guide the U.S. there. It references the United Nations Intergovernmental Panel on Climate Change report that warns nations of the need to rapidly transition the transportation sector to electric.

Although the U.S. federal government has not been supportive of policies to decarbonize, many states and local municipalities have been working hard to promote and expand driving electric. Therefore, for this week’s news roundup we chose to highlight some great work by EV enthusiasts that made the 2018 National Drive Electric Week a success!

The 2018 National Drive Electric Week (NDEW) saw record-breaking participation from electric vehicle drivers and attendees with over 321 events in all 50 states. NDEW started in 2011 as a single day devoted to showcasing the value and benefits of driving electric and has grown to a full week across the nation. This year from September 8-16 people all across the country learned more about electric vehicles at these engaging events. Plug-In America, one of the event’s national sponsors, recorded over 9,000 ride and drives! The Southern Alliance for Clean Energy (SACE) participated in promoting, attending and broadcasting many events throughout the Southeast. Below are some highlights.

Miami, FL– Brickell Energy and Southern Alliance for Clean Energy’s Next Car Pledge initiative co-hosted an interactive evening of all things EV. Held in conjunction with Miami’s weekly community/entrepreneur/social/business gathering at The Venture Cafe in the CIC Miami space, the event featured a variety of EVs from local private owners and area dealers including BMW, Chevy, Mercedes, Nissan and Tesla. There were cars outside next to the dual-port ChargePoint Level 2 universal charging station as well as expert speakers inside along with information and resources from local municipalities and the premiere of the video “Don’t be an ICEhole” about EV charging etiquette featuring EV driver and SACE volunteer Simon Rose. 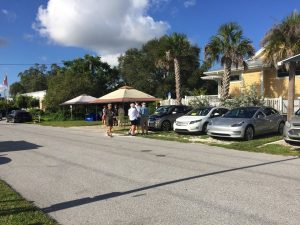 Sarasota, FL– The City of Sarasota and County of Sarasota officially proclaimed September 8-15, National Drive Electric Week. There were two events in Sarasota this year. Sarasota County Commissioner Michael Moran attended the first event on the 8th and read the proclamation for the Event. The second event on the 15th was at the Florida House Institute, a showcase for sustainability, where organizers focused on the affordability of EVs. The organizers encouraged people to look at pre-owned EVs that can be purchased in our area for $9,000-$12,000. Participants were provided with additional handouts with links to online resources to find and purchase pre-owned EVs. SACE was on-hand encouraging participants to sign the NextCar Pledge to learn more about driving electric.

New Port Richey, FL– Mayor Rob Marlowe was instrumental in getting the city’s inaugural National Drive Electric Week tailgate event on September 8. The event featured several local dealers who offered drivers test drives and had 11 models featured. The event was also an opportunity to showcase the city’s 3 new charging stations and show off the police department’s T3 electric vehicles. SACE was there talking with participants about the benefits of driving electric.

Tallahassee, FL– Sustainable Tallahassee hosted the city’s first annual Electric Vehicle Expo at Saint Paul’s United Methodist Church. The event was such a success that they will seek a larger venue next year! There were over 50 electric vehicles on display, including a StarMetro all-electric bus, SUVs and bikes. There were also information tables from local sustainability groups.

Atlanta, GA– The 2018 Atlanta Metro National Drive Electric Week event was held on Saturday, September 8, at Avalon in Alpharetta and was a huge success! There were 21 different models represented offering participants a diverse range with 81 vehicles to explore. The EV Club of the South and Clean Cities GA were on hand to engage drivers with information as well as a fun photo booth hosted by Georgia Power. 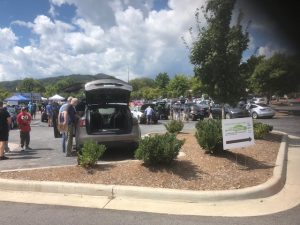 Asheville, NC– The event continues to grow every year. This image to the right is from Tesla X Driver Bennett who reported that there were over 50 EVs from various manufacturers and a lot of consumer interest.

Washington D.C.- The National Drive Electric Week event took place on Sunday, September 16, along the Mall. SACE staff member Sara Barczak (below) attended and got some great footage of several EV drivers (including a motorcycle!) sharing their stories on why they drive electric. One of our favorite videos of the day was with EV driver Percell with his Tesla S70D with some electrifying hood art of the one-and-only Nikola Tesla.

In addition to all the engaging events that occurred throughout the week, there were several major announcements across the country that will accelerate the shift to electrification transportation systems. At the Global Climate Action Summit in San Francisco, 12 states and regions joined The Climate Group’s zero-emission vehicle challenge. On September 11, Los Angeles Mayor Eric Garcetti announced the launch of the Climate Mayors Electric Vehicle Purchasing Collaborative. Additionally, charging system startups EVBox and ChargePoint announced some aggressive targets for their expected market share of the emerging EV charging market. And California regulators approved a landmark  $750 million in programs for investor-owned utilities to advance infrastructure for electric vehicles.

We can hardly wait for next year’s National Drive Electric week that will take place September 14-22, 2019! Make sure to mark your calendars!