As Walt Disney World celebrates its 50th anniversary, there is no doubt that the wonderful world of Disney has had, and continues to have, an enormous impact on Florida's economy and environment.

Growing up in Florida, it has long been plain for me to see the many ways that Walt Disney World has helped to shape the state — some for the better and some for the worse. As the Wonderful World of Disney celebrates its 50th anniversary during October 2021, I have been reflecting on Walt Disney World, and the many ways that it has had, and continues to have, an enormous impact on Florida’s economy and environment.

Walt Disney World opened at 10:00 in the morning of October 1st in 1971. It seems quaint now but there were roughly 2,000 people waiting in line when the gates opened. It’s interesting to note that they predicted 30,000 would show on the first day but only 10,000 paying customers showed up.

Walt Disney once said, “conservation isn’t just the business of a few people – it’s a matter that concerns all of us.” Since we know that the footprint of the park and resorts cut into green spaces and creates a slew of problems from waste to traffic, Walt would want to see the company he started do all it can do to address problems like climate change. Walt Disney World did make a recent commitment to zero net emissions and zero waste by 2030, water stewardship, and conservation plans beginning in 2021; serving 100% responsibly sourced seafood by 2022; and committing to implementing lower-impact products and reducing single-use plastics through the parks and cruise lines – so it’s made a start in what will be a long process.

In their 2021 Environmental Sustainability report, Disney has committed to using carbon-free electricity in all of their direct operations by 2030. As stated in the report, in order “[t]o minimize emissions of new projects, [Disney’s] buildings will be designed to near net zero –maximizing energy efficiency, electrification to reduce fuel use, and on-site renewables.”

Back in 2016, Disney World opened a solar facility that’s famously shaped like Mickey Mouse’s head. The five-megawatt solar facility on 22 acres near Epcot is made of 48,000 solar panels. Duke Energy sells the energy — enough to power 1,000 homes — to Reedy Creek. They also made Cinderella Castle at the Magic Kingdom more efficient by switching its holiday display of 170,000 lights to LED lighting. 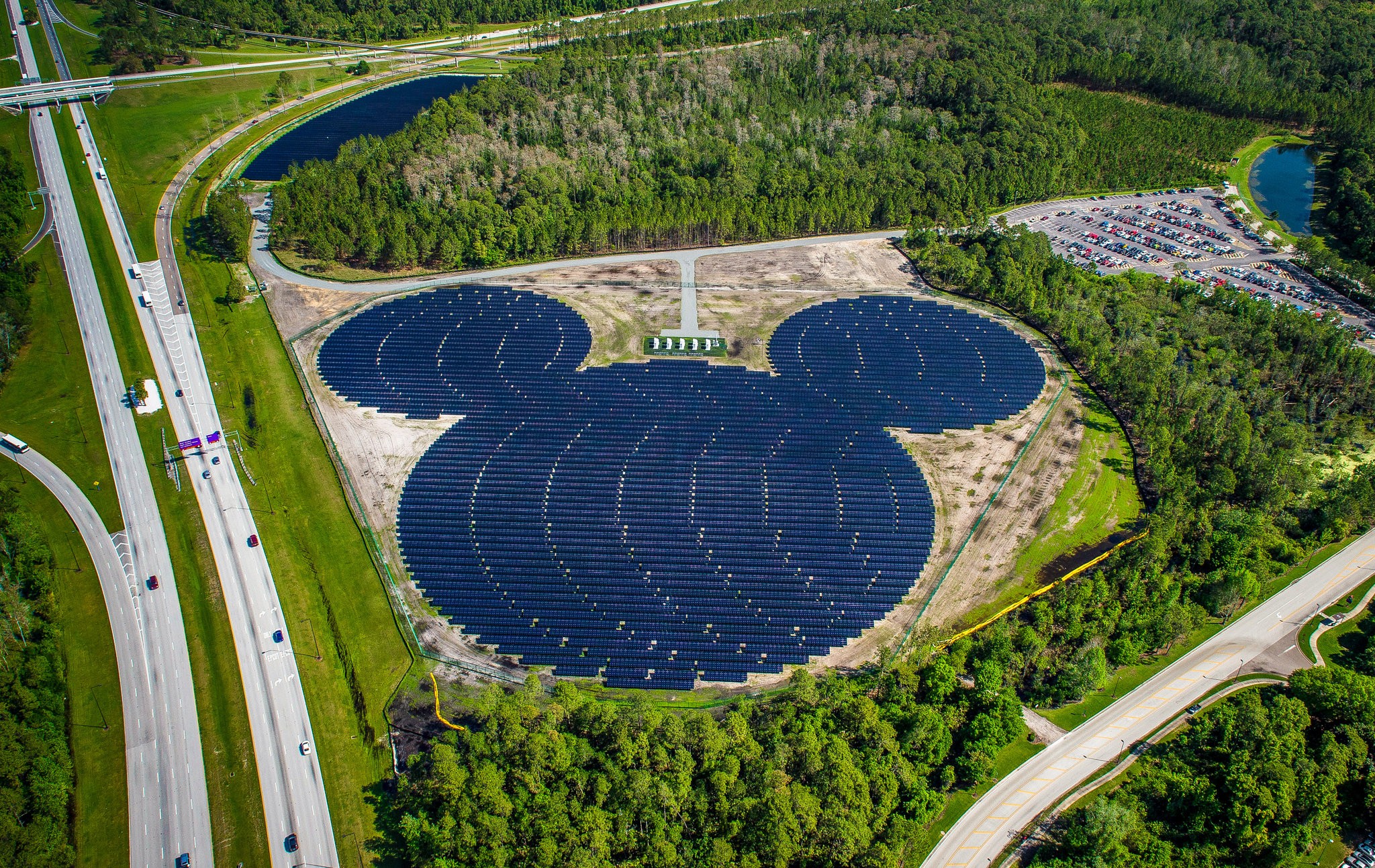 Then in late 2018, Disney flipped the switch on a 270-acre, 57MW solar facility just outside the Animal Kingdom with more than a half-million solar panels. This will reduce their net greenhouse gas emissions 50 percent worldwide by 2020, compared to 2012. This array will produce enough energy to supply 10,000 homes annually, and will reduce greenhouse gas emissions by more than 57,000 tons per year – the annual equivalent of removing roughly 9,300 automobiles from the roads according to Disney’s estimates.

Florida’s biggest industry is tourism. But one wonders, who is going to visit Disney or our world famous beaches when we have extreme heat and heavy rainfall. Other pillars of Florida’s economy like agriculture, real estate and construction are also impacted by climate change. The Potsdam Institute for Climate Impact Research just released a report that says there’s a 90-fold increase in the frequency of monthly heat extremes in the past ten years compared to 1951-1980 has been found by scientists in observation data.

I’m glad to see an important company like Disney take steps to clean energy, especially because they’re influencers at a global scale. The question is, will we all move quickly enough to stave off the worst impacts of the climate crisis.

Disney World has long signified the future and creativity — if there was ever a time for creative thinking into the future, the time is now.

Susan Glickman
Susan has worked with Southern Alliance for Clean Energy since 2001 as a consultant and lobbyist and was SACE’s Florida Director from 2013 to 2021. A native of Florida, Susan…
My Profile
FacebookInstagramTwitter

It's November, Where does the 2022 North Carolina Carbon Plan Stand?

On October 24, all intervenors' post-hearing filings were due to the NCUC. These are the final step where intervenors tell Commissioners what we want to see in the final Carbon Plan. We…