This is the fourth post in a series written by Dave Erb intended to demystify electric vehicle (EV) charging, both for prospective EV buyers and for new owners still getting to know their EVs.

*Please note this blog was published on March 9, 2020. We recognize that traveling is not recommended during COVID-19; however, we would still like to provide this information for you to use in the future.*

I hope that readers of this blog series realize by now that EV charging is a fairly simple change from internal combustion vehicle (ICV) fueling, and certainly not a sacrifice or added burden.  For most day-to-day driving, the change represents a time savings. Extra time is only involved on road trips. Even that time penalty is minimal, once you know what you’re doing.

Unfortunately, there have been several recent media pieces by people who didn’t know what they were doing, or behaved as if they didn’t.  The willful ignorance of two Wall Street Journal reporters cost them ridiculous amounts of time and turmoil on trips in Michigan and North Carolina.  In Motor Trend’s otherwise excellent comparison of the gas and electric versions of the Hyundai Kona, the (very knowledgeable) writers’ conscious decision to approach a road trip as if they were ignorant led to minor inconvenience and major charging expense.

Ignorance is not bliss.  What happens in Vegas doesn’t always stay in Vegas.  The only constant is change. Forewarned is forearmed.  Knowledge is power, don’t leave home without it.

Scope Out the Territory

Though there are still a few remaining gaps in coverage, DC fast chargers (DCFC) are now sufficiently common to allow convenient road tripping across most of the U.S. in any DCFC-equipped, long (200-plus mile) range EV.  It’s easiest in a Tesla, since the Tesla Supercharger network is a single, integrated entity. Tesla’s in-car navigation system includes a trip planner, which guides you to Superchargers en route and suggests an optimal charging strategy.  When you plug in, the network recognizes your car, and bills your credit card for the charging session.

That doesn’t mean it’s hard in other manufacturers’ EVs.  CCS and CHAdeMO chargers are as widespread as Tesla Superchargers, just not as integrated.  They’re owned and operated by multiple companies, which are installing new chargers at a rapid pace.  Some of the main networks are Electrify America, ChargePoint, EVgo, Greenlots, and Blink. Many of these companies require you to have an account to access their systems, either through your phone or a keycard, though some chargers have credit card readers.  Some of the companies have roaming agreements with other companies, much like cell phone providers, or cooperative agreements with EV manufacturers. The landscape is shifting rapidly, generally in the direction of greater user convenience.

But it’s spring break!  You want a road trip, not a research project.  Rather than study for a month before the midterm, let’s just read the Cliff Notes the morning of the test.  Pull up a location on Google Maps, type “electric vehicle charging stations” into the search line, and nearby chargers show on the map: 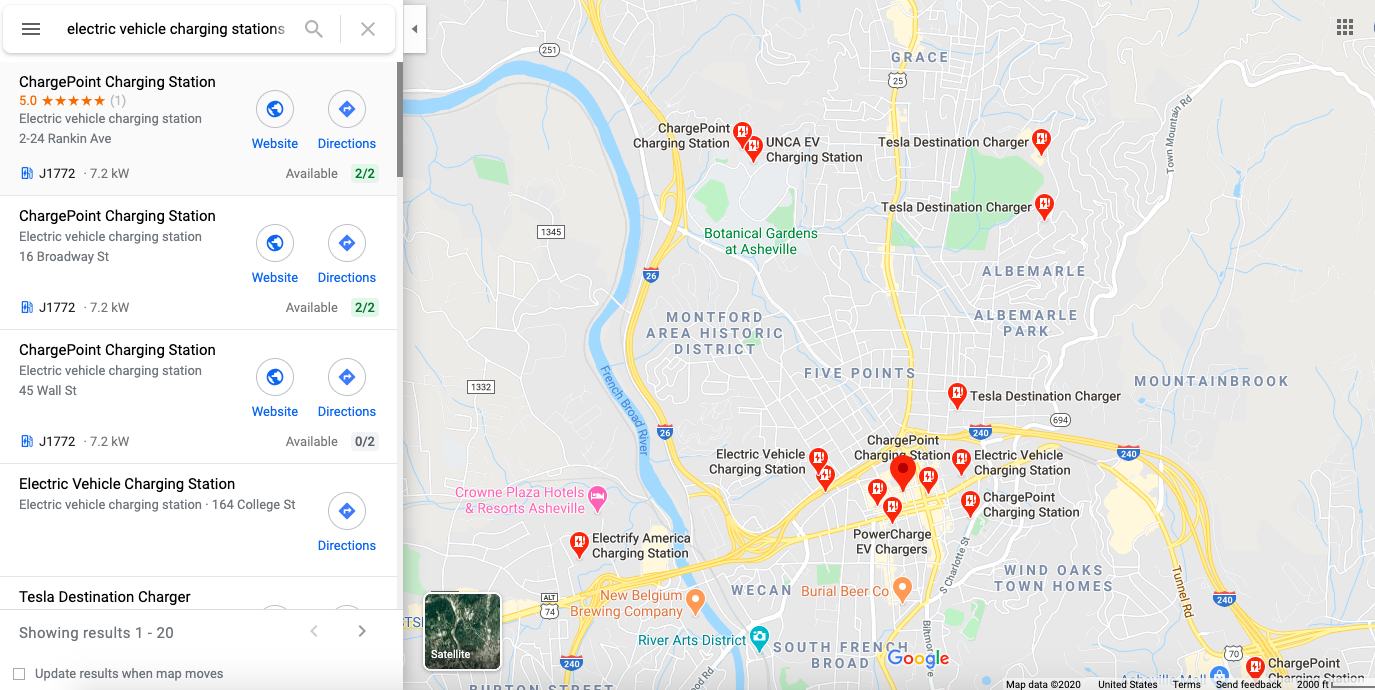 PlugShare also includes a trip planner.  And, because some of the networks are less diligent about maintenance than others, PlugShare’s crowdsourced reports on individual chargers are especially useful in avoiding the unpleasant (and, unfortunately, still too common) surprise of arriving at a charger which isn’t working.

Before All Else Fails, Read The Owner’s Manual

While DCFC allows EV road trips to resemble what we’ve always done with ICVs, the whole “splash and go, fill it full” mentality of gasoline refueling requires a little fine tuning.  Unless your trip conditions (e.g., distance between chargers) demand it, you shouldn’t charge higher than 80 percent full on a DCFC, for two reasons: speed and cost.

Unlike gas tanks, batteries can’t accept energy as fast when they’re close to full as they can when they’re less full.  To prevent damage, charging has to slow down drastically as the batteries get close to full. For example, a car that gains 600 miles of range per hour at 50 percent charge may slow itself to 120 mph at 80 percent charge, and to 20 mph at 95 percent charge.  A car that coasted into the DCFC on its last electron (zero percent charge, not a desirable state) may charge to 80 percent in 30 minutes, then take another hour or more to get to 100 percent. If chargers are available (as they usually are), it’s far more convenient to drain the battery to something around 20 percent, charge to 80 percent (or less), then drive on to the next charger.

The tapered charge rate has serious ramifications on charging cost.  Most DCFC fees are based on time (minutes), rather than energy (kilowatt-hours) or range (miles).  Charging beyond 80 percent can increase your cost per mile even more drastically than it increases your time.

One policy-related side note:  The state of California recently mandated that charging fees be based on energy, rather than time.  A DCFC station represents a huge capital investment. The main commodity being sold there is actually time, in the form of shorter waits, not energy.  Allowing drivers to tie up ultra-costly equipment for the extended periods required to charge to 100 percent, without any monetary penalty, will ultimately raise the cost of charging for everyone.  Let’s hope other states don’t follow California’s lead on this.

One Last Pop Quiz Before You Go

When is faster not really faster?  Answer: When your road trip slows down.  Hopefully, you’re planning to do more than just drive on this vacation.  Level 2 chargers are available at hotels, restaurants, campgrounds, marinas, parks, and other destinations.  Look for them on PlugShare while you’re planning your trip, and you can get quite a bit of your charging done while you sleep, eat, hike, and otherwise enjoy life.  Ten seconds to plug in and ten seconds to unplug beats even the fastest DCFC. And many of those L2 chargers are free, leaving you with more money to spend on sunburn cream and hangover remedies.  Happy travels!

Note about this blog series author: In a four-decade automotive engineering career focused on energy and emissions, Dave developed vehicles using gasoline, diesel, biodiesel, alcohol, natural gas, electric, and hybrid-electric powertrains. From 1995 to 2004, he created and taught a three-day professional development short course on “Design of Hybrid Electric Vehicles” for the Society of Automotive Engineers. He is the author of Chapter 1 of “Driving to Net 0: Stories of Hope for a Carbon-Free Future,” a collection of 15 first-person accounts of families pursuing sustainability by combining solar houses with electric vehicles and a volunteer with the Southern Alliance for Clean Energy.

Electric school buses offer a better solution for Tennessee school districts concerned about students’ health, the environment and their pocketbooks.