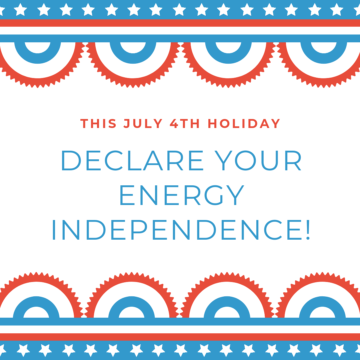 This 4th of July, celebrate the anniversary of America’s independence with more than just cookouts and sparklers. This Independence Day, declare your independence from our fossil fuel-power past and take some small personal steps towards realizing a clean(er) energy household.

A decade ago, just before another Independence Day, my Irish-born husband returned from the hardware store with bags full of supplies and said that he would observe this nation’s Independence Day by making our home more energy efficient (and less dependent on our local utility, Duke Energy).

While we were not then, and still are not, in a financial position to invest in solar panels or upgrade most of our relatively-new appliances, we were inspired by the hands-on approach to energy savings demonstrated in the short documentary Kilowatt Ours and had one year of utility bills from living in our 1920s house to compare against once we completed our energy efficiency upgrades.

Frugal by nature (we still use ceiling fans in lieu of air conditioning in the summer and hot-water bottles and a wood-burning stove instead of an over-heated house on cold winter nights), our utility bills tended to be lower than average even before our energy-savings efforts began in 2007, but we still felt there might be room for improvement. We spent the better part of a week changing every light bulb in the house to compact fluorescents or LEDs (I bet few people have any idea just how many light bulbs are in their entire house – we had almost 30 and our house is only 1400 square feet), wrapping our water heater tank with an inexpensive insulation blanket, and covering the first five feet of hot-water pipes coming from the water heater with foam sleeves. Our energy savings were noticeable and immediate – in the first year our electricity and gas bills dropped by an average of 10% despite acquiring an Energy Star-rated, 7 cubic foot chest freezer.

Some years later, we bought tubes of caulking by the case to caulk cracks that are ever-present in old houses; we added insulation made from recycled fibers in the outer rooms; upgraded our ‘solar-powered’ clothes dryer by hanging a more durable clothes line; invested in a larger, more sturdy indoor drying rack to realize even greater savings in our monthly power bills; and replaced multiple of the oldest, leakiest windows in the house.

Despite all of these improvements, our electricity demands have risen somewhat in the last few years due to a few factors: (1) we went from two cell phones and a laptop computer in 2007 to four smart phones, a desktop and three laptop computers (hello Twenty First Century); (2) our household takes much more frequent, natural-gas heated showers (hello teenagers) and (3) washes considerably more laundry loads than we did in 2007 (hello teenage girls!). Thus our recent home energy audit shows our household has been on par with an ‘efficient home’ in our area most of the last year, and in a few months we consumed as much energy as an ‘average home’ so there’s still room for improvement! [Note – my family also purchased an electric vehicle in late December 2016, but that has not yet been charged at my house courtesy of a solar-powered charger at Asheville’s SACE office. If we begin to charge at home in the future, that will understandably alter our energy consumption.]

This holiday weekend, I encourage you to take a trip to your local hardware store to begin (or continue) working towards energy independence in your own home to trim your bills and cut some of your fossil-fueled energy dependence!

Is this our generation's moonshot moment? This Earth Month has seen growing momentum for climate action

People have begun to ask: is this our generation's moonshot moment – our time to apply our motivation, energies, and skills to tackle climate change using clean technology solutions?

Fully decarbonizing the power sector, along with electrification, would reduce U.S. greenhouse gas emissions by 70-80%, helping fulfill our commitments under the Paris Climate Agreement while simultaneously creating millions of jobs, cleaning…