Moving toxic coal ash from its current location in Memphis is a necessary first step to protecting our water supply, but it needs to be moved in the safest, least impactful way.

Update: At its May 24 meeting, the Memphis City Council unanimously approved a resolution calling on TVA to conduct a supplemental environmental impact statement for its coal ash removal plan.

Last year, TVA received final approval from the Tennessee Department of Environment and Conservation (TDEC) to move 3 million cubic yards of coal ash from the former Allen steam plant in Southwest Memphis to a South Shelby landfill. The trucks began hauling the coal ash late last year, with almost no public input or oversight, and much to the surprise of Memphis elected officials and the residents in the neighborhoods the trucks are traveling through.

It’s difficult to envision how and why moving this amount of coal ash might impact Memphis, so let’s be clear about five facts upfront:

TVA has prioritized corporate greed over neighborhood needs by its lack of transparency and communication about its plans to move the coal ash through Memphis. Memphis City Council members did not even learn about TVA’s plans until after a decision was already made to dump the coal ash in the South Shelby landfill.

Since TVA failed to do its due diligence to inform the public, a group of allies gathered to host a virtual town hall to educate the public on TVA’s plans and the risks associated with coal ash. Panelists included:

In case you missed this informative event, you can watch the recording here.

What is coal ash?

Coal ash is the residual material left over after coal is burned. Exposure to coal ash and the toxic chemicals it contains such as arsenic, lead, chromium, and mercury can cause shortness of breath, nausea, and vomiting. Long-term exposure can lead to kidney and liver damage, cancers, and cardiac arrhythmia.

Currently, coal ash is considered regular waste and thus can be disposed of in a landfill along with other household waste. But exposure to toxic coal ash led to the death of more than 50 coal ash cleanup workers who responded to the Kingston coal ash spill in 2008 because they were denied access to proper personal protective equipment. During the virtual town hall, Executive Director of Sowing Justice Marquita Bradshaw explained that coal ash should be classified as a toxic substance by the EPA.

How and Where Is TVA Planning To Move Coal Ash from the Allen Plant?

TVA is planning to move the coal ash from the Allen site in Southwest Memphis to a lined pit in the South Shelby Landfill in Southeast Memphis via specially-designed dump trucks that will be operating 24 hours a day, 7 days a week, for the next 10 years.

Which Neighborhoods Will Be Affected?

Coal ash will be trucked out of the coal ash impoundments at Allen, and then travel along Shelby Drive through the predominantly Black neighborhoods of Whitehaven, Oakhaven, Walker Homes, and Westwood.

How Is the Memphis Aquifer at Risk?

During the virtual town hall, panelists discussed how the current location and removal of the coal ash threatens to contaminate the Memphis Aquifer, which is one of the most unique and pristine water supplies in the country. The current site of the coal ash storage at the former Allen steam plant sits above the Memphis Sands Aquifer near a known breach in the clay layer that separates a smaller surface-level aquifer from the deeper Memphis Sands Aquifer. Assessments have found traces of arsenic in the water below the Allen site, and without removal, the coal ash will continue to pose a threat to the drinking water supply as toxins from the ash seep through the breach in the clay layer.

While it’s clear that the coal ash must be moved from the current site, TVA’s process for doing so is blatantly flawed. 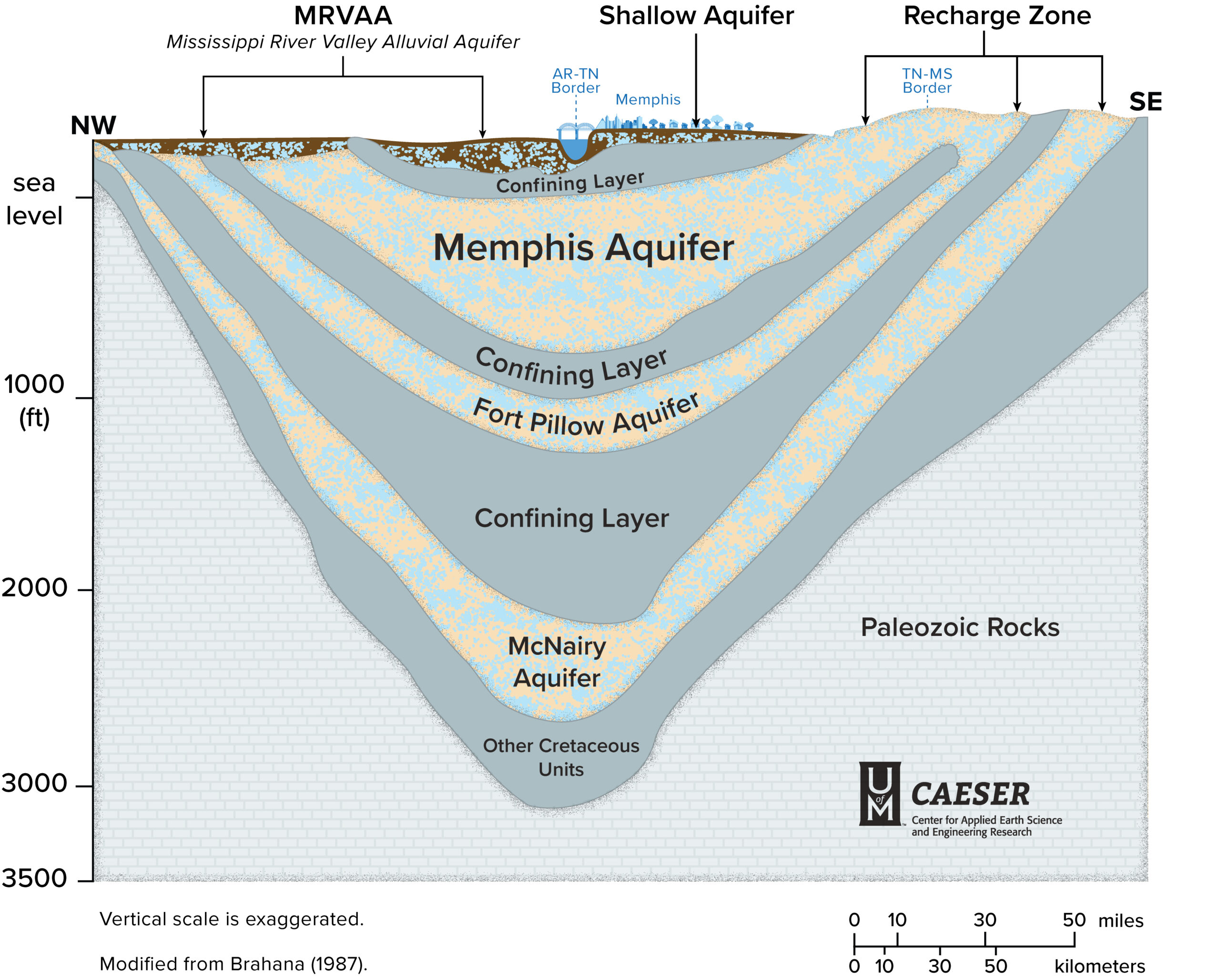 “The Memphis Sands Aquifer is one of the most unique in the country and it moves very slow. Over the past century it has been ignored and is seeing legacy pollution now. We don’t know how extensive that is yet either.”

Houston also said that TVA made a decision in secret to dig five deep wells right next to coal ash pits, further highlighting the lack of transparency we’ve seen from TVA in recent years. She said that although moving the coal ash is certainly a needed first step in cleaning up Memphis’ water supply, TVA is not doing so in the least impactful way to protect our environment and clean up our water supply.

SACE’s Research Director, Maggie Shober, reminded listeners that SACE was founded in the 1980s as a TVA watchdog organization, and noted the best option for Memphis would have been to close the Allen steam plant much sooner.

“While it is closed now, many coal plants are still in operation and will be for another 12-13 years. Toxic sludge continues being developed all over the valley.”

Councilmember Dr. Jeff Warren first learned of the dangers of coal ash when he received studies from MLGW and realized there were toxic plumes going towards the aquifer that needed to be cleaned up. He thought the city should move the ash down the Mississippi River on a barge to Texas, but TDEC informed him that the fewer times you touch it, the better. So, while he understands that putting it in a dump truck isn’t the worst idea, he does have a problem with trucking it and dumping it in poor African American communities.

“We need a plan B from TVA. What will they do with the 95% while moving the 5%? It will take 10 years to get to the bottom so we can even get to the stuff that’s moving toward the aquifer.”

Later, Dr. Warren also reminded participants about the major decision facing Memphis and the city’s future power supply. While it hasn’t been stated publicly, one would certainly think the coal ash situation with TVA will weigh into the MLGW decision on whether or not to pursue alternative electricity suppliers for Memphis.

“Not listening to the coalition isn’t in their (TVAs) best interest given MLGW is 12% of TVA’s business and is their biggest customer.”

When Dennis Lynch with the Sierra Club-Chickasaw Group discussed the importance of MLGW having a renewable energy future, Maggie Shober added that there are several alternative options available to the continued burning of fossil fuels like coal and fossil gas. She also mentioned low-cost renewable energy options such as solar and wind.

“Energy efficiency is the most cost effective option because every kilowatt hour not used is one that is not being generated, and it’s cheaper to not use electricity than to generate it. It also lowers electricity bills, and the Southeast has some of the highest electricity bills in the U.S.”

Houston also mentioned that in addition to the coal ash transportation, research has found that there is no clay layer protecting the aquifer in certain areas, so we don’t know if contaminants made it down to deeper layers. TDEC is working with TVA on the plan with a pump-and-treat system, but it’s not a done deal, and the plan can certainly be improved. Meanwhile, ash continues to slowly sink toward the aquifer. Bradshaw stated the cold truth about coal ash: no one wants it in their backyard, yet Memphis is stuck with it.

“The transportation part is the most dangerous part. Even if you took it 100 miles away, it’s probably going to be an environmental justice strapped community that doesn’t have the roads and infrastructure to support it. Plus they’re likely to get water sourced from wells or shallow groundwater. The Kingston coal ash spill showed us the hazards. We need clean air, water and soil for the future so we have to look at the transportation and remediation process.”

What can be done?

Lynch reminded participants that we all need to keep putting pressure on TVA to do a supplemental environmental impact statement (SEIS) to gather more information. Houston and Protect Our Aquifer have also been pushing for a SEIS. A SEIS would further examine the possible environmental and health impacts TVA’s plan will have on the Memphis community. Councilman Warren is drafting a resolution calling on TVA to conduct a SEIS and expects to bring it before City Council soon.

Send a message to City Council members to demand TVA conduct a SEIS that would further examine the possible environmental and health impacts TVA’s plan will have on the Memphis community. If you can, please personalize your message. Together we can speak out and send a message to TVA to take our concerns seriously.

Moving toxic coal ash away from its current location in Memphis is a necessary first step to protecting our water supply, but the coal ash needs to be moved in a way that is least impactful to protect our communities, environment, and water supply. Stay tuned to SACE for updates, and also to our partner groups for future updates on coal ash, stopping new fossil gas infrastructure, supporting equitable and clean energy in Memphis, and how you can get involved!

Pearl Eva Walker
Pearl Eva Walker is an energy justice advocate, writer, and public speaker based in Memphis, Tennessee. She is deeply involved in the Memphis community and works closely with local electeds…
My Profile
FacebookInstagramTwitter

On Friday, January 20, 2023, the Tennessee Valley Authority's CEO, Jeff Lyash published a Record of Decision in the Federal Register: it plans to replace the retiring Cumberland coal plant with a…