As the year comes to a close, SACE reflects on the progress we've seen toward a clean energy future in the Southeast and beyond in 2018.

When it comes to our environment, we have to admit: There’s been some disheartening news this year. The findings laid out by recent reports like the Fourth National Climate Assessment and the IPCC Special Report on global warming are no joke, and we know we have our work cut out for us in 2019 as we continue our fight for clean energy solutions.

But it’s not all doom and gloom. This year has also seen some remarkable progress toward a clean energy future in the Southeast and beyond. Today, as the year comes to a close, we want to take a moment to reflect on all of the clean energy wins of 2018 — and we think there are plenty worth celebrating!:

The appetite for solar is growing dramatically in the Southeast, with increased demand, installations, and commitments.

Solar installations in Florida land the Sunshine State in second place for solar installed through the third quarter across the board! Florida also surpassed two gigawatts of solar, a respectable milestone. What’s more, Florida’s Public Service Commission approved solar leasing, which SACE and its Florida supporters helped pave the way for by successfully passing Amendment 4 in the 2016 elections. This means Floridians have one more way to go solar now!

It’s not just the Sunshine State that’s eager to go solar; Georgia Power recently issued a Request for Proposal (RFP) for 540 megawatts of renewables, and a solar rebate program in North Carolina was oversubscribed in just two weeks after its launch in July. In South Carolina, SACE and other allies negotiated with Duke Energy Carolinas to (temporarily) reinstate their solar net metering program, saving countless solar jobs in the process.

Cities, and even entire states, across the U.S. are committing to 100% clean energy.

Nearly 50 U.S. cities and two states — Hawaii and California — committed to 100 percent clean energy goals in 2018. In total, more than 100 cities across the U.S. have now committed to working toward 100 percent renewable energy!

Utilities are committing to reducing carbon emissions, too.

Xcel Energy, based in Minneapolis, became the first major utility in the U.S. to commit to 100 percent clean energy this year! The utility, which has 3.6 million customers in eight states — Colorado, Michigan, Minnesota, New Mexico, North Dakota, South Dakota, Texas, and Wisconsin — plans to be 80 percent carbon-free by 2030 and 100 percent carbon-free by 2050. Here in the Southeast, Atlanta-based Southern Company — one of the largest utilities in the U.S. — announced earlier this year that the company plans to be “low to no-carbon” by 2050.

The first U.S. airport that plans to run on 100% solar energy.

The Chattanooga Metropolitan Airport in Tennessee announced recently that it is about to become the first airport in the U.S. to run on 100 percent solar energy — and other airports are interested in following suit. Representatives from nearly 50 airports around the world have reached out to learn more about the solar project, according to the airport’s vice president of planning and development. Georgia’s Hartsfield–Jackson Atlanta International Airport is also actively researching the possibility of implementing a “micro-grid” approach, combining solar and battery storage to help power the airport overnight and during cloudy days.

Major corporations are investing in solar in the Southeast.

Florida voters passed Amendment 9 in this year’s midterm election, adding a ban on offshore drilling in state waters to the state’s Constitution. The ballot initiative received nearly 69 percent of the vote, as Floridians across the state voiced their support for protecting our coasts. As SACE Florida Director Susan Glickman said, “Voters have made it loud and clear: we do not want offshore drilling anywhere near our coasts.”

Governor Cooper issued an executive order to take action on climate change in North Carolina by committing to developing clean energy, bringing with it better education, workforce development, and clean energy jobs. Among other commitments, the order includes reaching the following state goals by 2025:

In the absence of federal and state leadership on climate change, local government leaders in Florida have been stepping up to fill the climate action void. In the Tampa Bay region on Florida’s west coast — one of

the nation’s most vulnerable areas to the impacts of climate change — several counties and cities came together in October to form the Tampa Bay Regional Resiliency Coalition, an effort that SACE played a key role in. This new initiative will enable collaboration among local governments to address challenges such as sea level rise and to develop a regional climate action plan. Just recently, the East Central Florida Regional Planning Council passed a resolution to develop a regional resiliency collaborative in its area. Plus, the statewide Florida Association of Counties added the call for a State Resiliency Plan as one of its legislative priorities.

Electric vehicles are becoming a reality for more and more Americans.

It’s been a big year for EVs, with the U.S. hitting the milestone of 1 million plug-in electric vehicles sold by October of this year, and the pace of EV sales is rapidly increasing. Globally, 4 million electric and hybrid vehicles were sold by June of this year, and Bloomberg NEF predicts that number will reach 5 million in early 2019.

An impressive new fully electric pickup truck was also unveiled this year, offering more than 400 miles of range with its largest battery pack and some 800 horsepower. The truck will also be able to accelerate from zero to 100 miles per hour in seven seconds and tow a whopping 11,000 pounds.

Energy efficiency continues to be a cost-effective solution for reducing the Southeast’s carbon footprint.

SACE’s Energy Efficiency in the Southeast 2018 Annual Report was released this month, showing that Duke Energy Carolinas became the first major utility in our region to save one percent of its energy sales through energy efficiency — an important milestone that raises the bar for other utilities in the region. 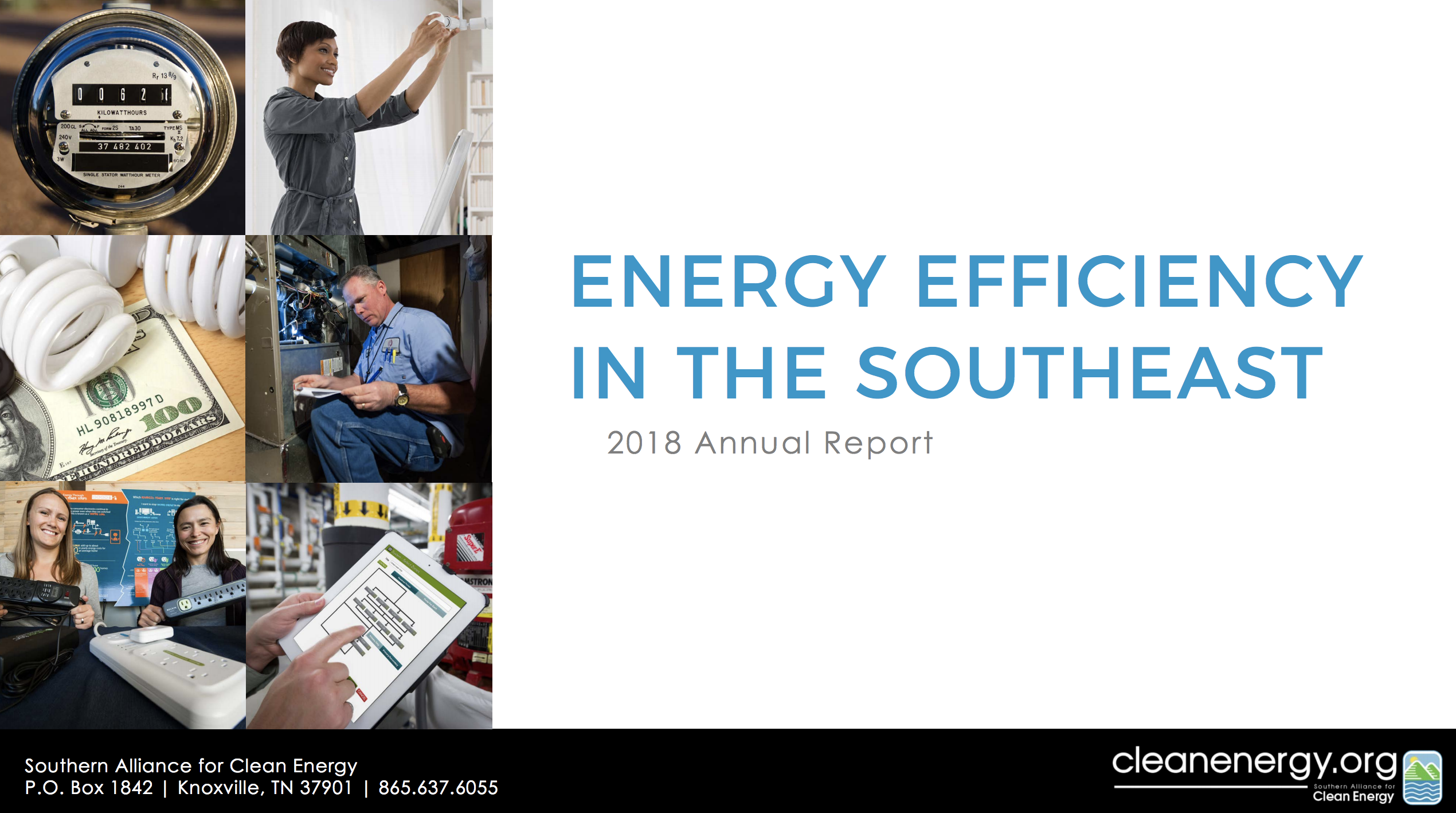 Though 2018 data is not yet available, the report shows that from 2013 through 2017, utility energy efficiency programs in the Southeast offset the carbon emissions equivalent of more than 1 million cars and reduced the need for at least twenty 600-MW gas fired power plants since 2010. In 2017 alone, these efficiency programs in the Southeast saved enough energy to power more than 2 million homes a year.

We’re continuing the fight against risky nuclear energy plants in the Southeast.

The controversial pursuit by a private investor to purchase and complete the abandoned Bellefronte “zombie” nuclear plant near Scottsboro, Alabama, was scrapped. As SACE Executive Director Stephen Smith noted,

“Bellefonte is like a Ford Pinto. It is an antiquated 1970s version of a nuclear plant, that is out of date, not modern, not able to be brought online. Never has this design ever received an operating license in the United States.”

Cheers to progress! Let’s keep up the fight for a clean energy future.

We hope these clean energy wins leave you feeling optimistic as we enter a new year full of new possibilities. The Southeast, and the U.S. in general, have come a long way in recent years, and we are committed to ensuring that progress continues and accelerates. To stay up to date on the latest developments in the world of clean energy, be sure to sign up for our occasional email updates. And if you support our efforts to ensure clean, safe and healthy communities throughout the Southeast, please consider making a year-end contribution so that we can keep up the fight for clean energy in 2019.

Check out our annual Solar in the Southeast report — identifying leaders (SunRisers) and laggards (SunBlockers) — and stay tuned for next year’s report, which will be released in early 2019!